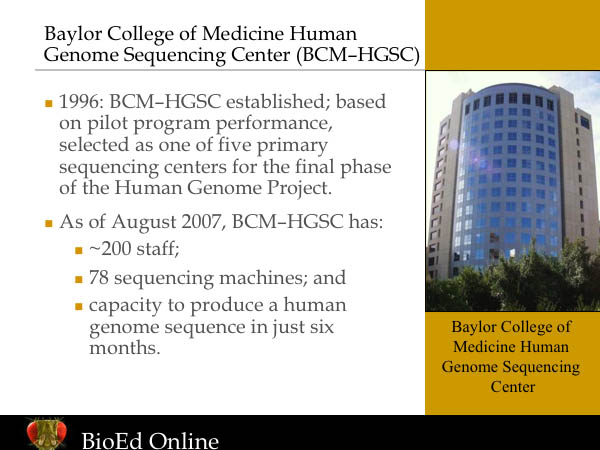 Edited Transcript from “The Pathway to Genomic Medicine,” Richard Gibbs, PhD*
So from that period, I guess it’s now six years since that first draft of the human genome appeared, and four years since the finished genome, and we’ve continued to build the enterprise of being able to sequence DNA in the way that we learned to do it in the context of the Human Genome Project. So for those of you who’ve been upstairs—and if you haven’t, you’re certainly invited to come and look—we now have this big machine. It’s three floors of this building, and it has 200 people, and it has a floor full in instruments and computers. And its job right now is to produce about a one times coverage of a mammalian genome every month [9/2007]. So in some contexts, that’s remarkable.

Because through the Genome Project, we started doing a very tiny fraction of that, and wondered how we could do this entire job. Now we can cover a whole human in one month. Normally, for reference, when we sequence a mammal, such as a human, we would do a six-fold coverage. In six months a facility like ours can actually push out a human genome sequence, equivalent to what the Human Genome Project offered, at least at its first phase. And so that’s a number to keep in mind, please. We have a three billion—base genome. You have two copies of that. You have six billion bases; three billion from your mother and three billion from your father. And that’s about the number of raw bases we can push out from the Genome Center.