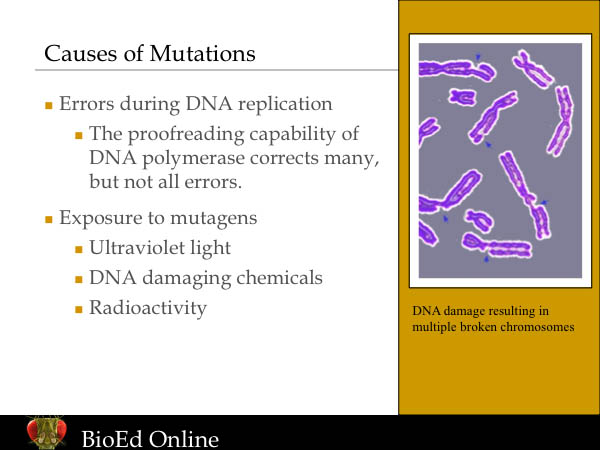 The most common causes of mutations in DNA are errors during DNA replication and exposure to mutagens. Although the proofreading capability of human DNA polymerase reduces the error rate of DNA replication to less than 1 base pair per billion base pairs replicated, mutations can remain after DNA replication. Slippage of the DNA polymerase along the DNA strand during replication also can lead to small insertions or deletions within the sequence of a gene. Typically, slippage occurs in repetitive sequences, but conformational irregularities of the unwound DNA also have been shown to contribute to the occurrence of small insertion, duplication, or deletion mutations.

Exposure to ultraviolet light, mutagenic chemicals, and radioactivity can damage DNA. The damage caused and the consequences of the damage are related to the agent to which one is exposed, the age at which the exposure occurs, the dose and duration of exposure, and the genes affected. For example, exposure of fetuses to large doses of particular mutagens may have more significant clinical consequences than short term, low dose exposure of an adult.

Certain mutagens cause characteristic types of DNA damage. For example, radioactivity typically causes double-strand breaks in the DNA, while certain chemicals are more likely to cause nucleotide substitutions.