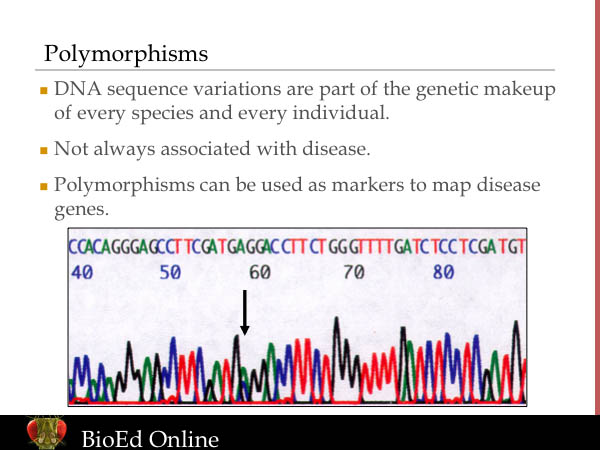 The slide shows an electropherogram generated by automated fluorescent DNA sequencing of a segment of DNA using an ABI 310 Genetic Analyzer (Applied Biosystems, Foster City, CA, USA). The arrow shows a nucleotide substitution in one of the two copies of this gene in this individual. One copy of the gene (allele) carries an A nucleotide (green peak) while the other allele carries a C nucleotide (blue peak). This nucleotide substitution is detected as a dual peak in the output of the sequence analysis software. In this case, the DNA sequence variation results in a missense mutation. Missense mutations can be associated with disease or they may be benign polymorphisms. The detection of variations in the DNA sequence of a gene that are uncertain biological consequence can complicate the interpretation of genetic test results.

The human genome also contains a number of repetitive elements or tandemly repeated sequences. The size of these repeated sequences varies among individuals. Many of these variable length repetitive sequences are benign and simply represent normal variability in the human genome, while some are associated with disease. The polymorphic nature of repetitive DNA sequences is the basis for much of the DNA-based forensic analyses performed today including paternity and personal identification testing.