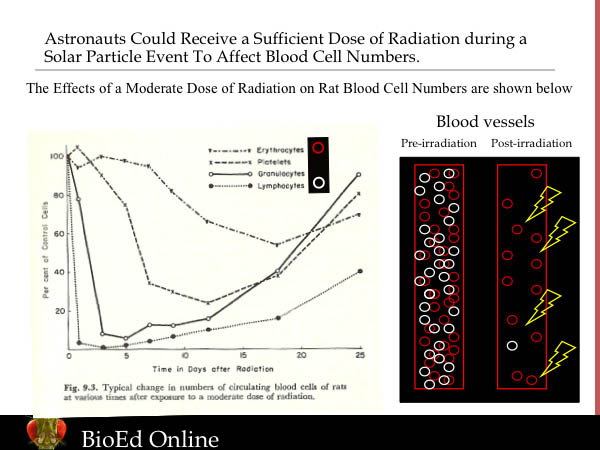 Transcript:
Many of the current NSBRI Radiation Effects Team projects are aimed at assessing risks of space radiation-induced adverse effects, such as those leading to heart disease (cardiovascular risk), cancer and hematological parameters. It is recognized that ionizing radiation has major effects on the cells of the immune and blood-forming systems, with particularly profound effects leading to decreases in the numbers of circulating granulocytes, also called polymorphonuclear leukocytes, and lymphocytes, as can be observed in the graph above, showing the changes with time in numbers of circulating blood cells following exposure to a moderate dose of radiation.

Several current projects involve studies related to the development of pharmaceutical and dietary supplement countermeasures for the cytotoxic effects of space radiation on hematopoietic cells and their progenitor cells, and for the development of space radiation-induced malignancies derived from hematopoietic cells. Another project involves studies of countermeasures for synergism between space radiation and hind limb unloading, an animal model system simulating microgravity conditions, in loss of white cells (lymphocytes).