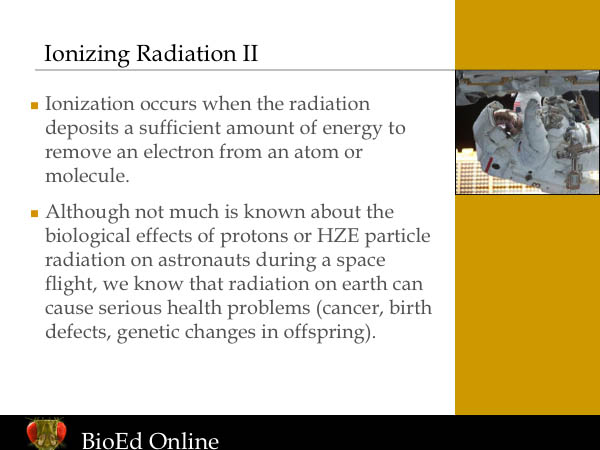 Transcript:
The types of radiation of most concern for the production of biological effects are called ionizing radiations. Ionizing radiation has the ability to penetrate deeply into our bodies and damage critical biomolecules, in our tissues, that are needed to function properly. The deposition of energy from ionizing radiation results in the ejection of electrons from atoms within cells, which then results in the ionization of atoms in the cell. Such ionizations are only the first event in a chain of chemical reactions that lead to the known biologic effects of radiation, some of which you have probably heard of, like the induction of cancer and birth defects, and the production of alterations in the DNA of our germ cells (which can lead to heritable genetic changes in our offspring). It is expected that the major biological effects of radiation are brought about by changes in the DNA of our cells, the basic units of structure and function in biological systems. So measurements of DNA damage figure prominently in radiation biology research.