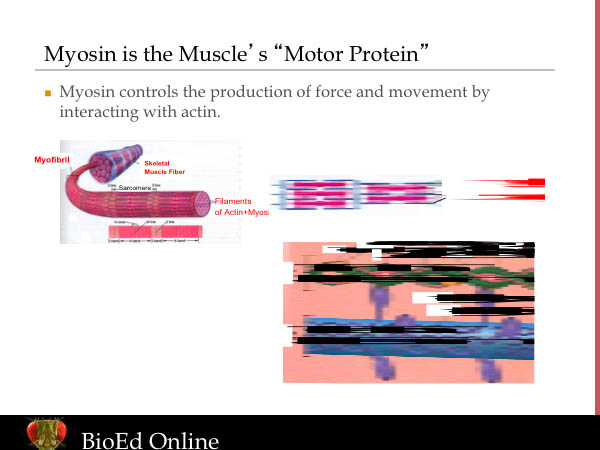 Myosin is the Muscle’s “Motor Protein”

Skeletal muscle fibers are long and cylindrical in shape. The geometrical configuration is maintained in the subcelluar network, which is organized into bundles of filaments containing an array of proteins, the chief of which are two key proteins designated as myosin and actin. As depicted in the lower figure, the myosin molecule resembles a hockey stick consisting of the head and backbone (tail) units. When these myosin molecules are organized in the filament, they are called the thick filament.

In contrast, actin molecules are organized into another filament structure resembling a necklace of beads twisted around one another. When the myosin molecules are enabled to interact with the actin filament during the process of contraction, the myosin heads change configuration and slide the actin filaments along their structure. The process, long referred to as the sliding filament hypothesis, defines how muscle fibers shorten and allow our bodies to move our limbs and trunk. The dynamics of this process are illustrated on the next slide.

Do you think this molecular structure is well designed to enable muscles to create force and movement of the limbs?

ADDITIONAL NOTES FROM SPEAKER’S TRANSCRIPT (http://www.bioedonline.org/presentations/)
The schematic at the top describes an individual muscle fiber. One unique feature of muscle fiber is that it expresses a complex structure that we call the contractile component. In that contractile structure, there are two primary proteins. One is myosin, the motor protein, and the other is actin, which serves as a backbone for the myosin heavy chain (MHC). What you see at the bottom is a depiction of the myosin motor protein with a head region. That head region binds to the actin and creates a chemical reaction so that force can be generated. Actually, there can be movement occurring to slide the actin chain along the myosin, thus creating force as well as movement.