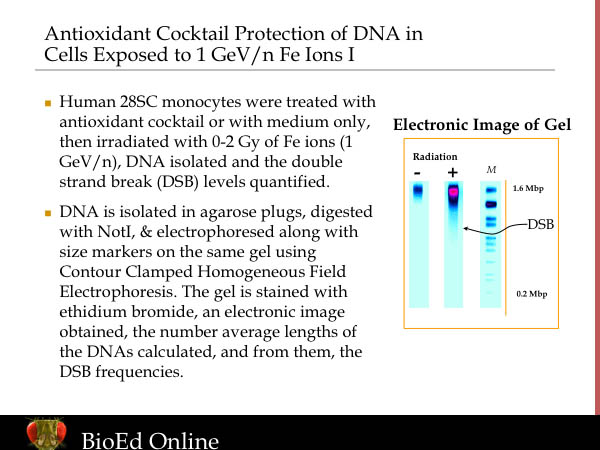 Transcript:
In a collaborative study with other National Space Biomedical Research Institute (NSBRI) researchers and members of the Radiation Effects Team, Dr. Alan Gewirtz and Dr. Betsy Sutherland, we observed that an antioxidant mixture (called the antioxidant cocktail in the figures shown here) could reduce the levels of double-strand DNA damage produced in hematopoietic cells by iron ions.

Additional Information:
Gy = Unit of measurement of the absorbed radiation dose (which measures the total energy absorbed per unit mass). A Gray (Gy)_is defined as: 1 Gray (Gy) = 1 Joule/kg.  An older unit for the absorbed dose, which is no longer used, is the rad, which is defined as: 1 rad = 100 ergs/g = 0.01 Gy.
GeV = In particle physics, energy is expressed in terms of electron volts (eV). One eV (electron Volt) is the amount of energy an electron acquires when it moves through a potential difference of 1 Volt (in a vacuum).  G stands for Giga, or 109. Thus, a GeV is a billion electron Volts.