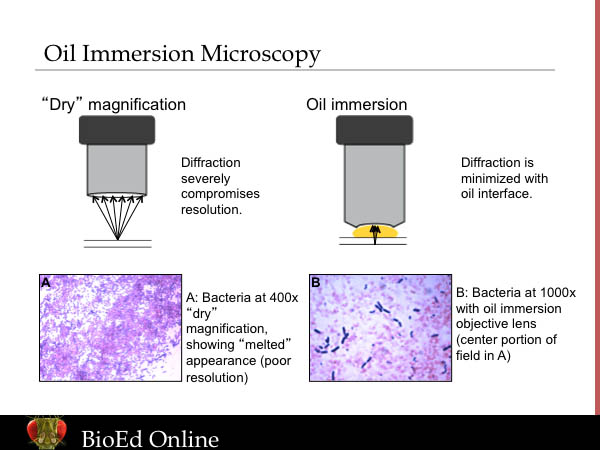 When a stream of photons travels through a medium, such as air, and strikes or exits a surface of a different medium, such as glass, its velocity and its direction change. The extent of deviation from the original path depends on the angle of the light ray from the perpendicular, and also varies with wavelength. White light consists of a spectrum of wavelengths, so on its way through a specimen, through glass, and into air, light passing through any one point is fairly well scattered. Scattering may not be noticeable at low magnification, but at magnifications above 200x, it will make what should be a discrete point look like a fuzzy ball. Similarly, what should be separate cells, such as in a chain of bacterial rods, will look like a melted thread.

Immersion oil typically has a refractive index* of 1.5, nearly the same as that of glass. That means that as light passes between glass and oil, it does not change velocity significantly, and does not bend as much. Using oil, we can exercise much greater control in concentrating light on the back lens of an objective lens, matching its numerical aperture and improving resolution tremendously.

By the way, light passing at 90 degrees to a surface doesn't bend at all. We obtain very good resolution with parallel light rays (i.e., with light coming in at right angles to the surface of a lens). At the center of a lens, light rays are parallel. This is the basis for the pinhole camera, and is the reason why near-sighted people can see more clearly when they squint.