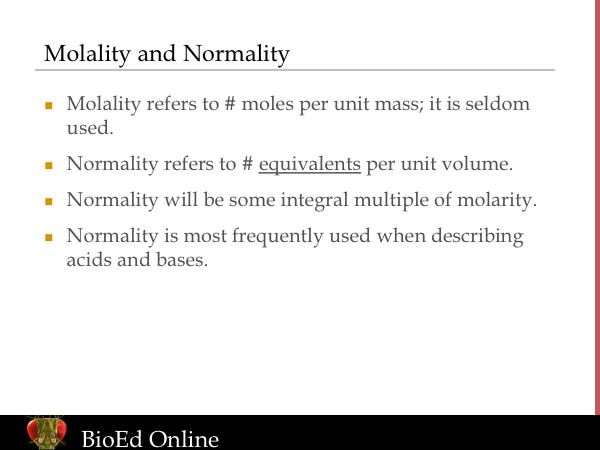 I have never prepared a solution from a molal formula. Molality refers to a number of moles per kilogram of solvent (pure solvent, that is, not total kilograms of the solution). Molality is useful when the concern is the effect of a solute on the physical properties of a solution, particularly on the boiling or freezing point. We have few applications for molal formulas in biology. If you do encounter a molal formula, the rules for preparing a molar solution apply. However, you must substitute moles per gram of the completed solution for moles per final volume.

Normality refers to the number of moles of a solute (number of equivalents), relative to some product. These days, normality is most often used when describing the concentrations of acids and bases. Sodium hydroxide (NaOH) is commonly used to make biological solutions more alkaline. One mole of NaOH dissociates to produce one mole of hydroxyl ions. Therefore there is one equivalent of NaOH per mole of NaOH. One mole of HCl dissociates to produce one mole of hydrogen ions, so there is one equivalent of HCl per mole.

On the other hand, sulfuric acid (H2SO4) releases two moles of hydrogen ions per mole upon dissociation. Thus, there are 2 equivalents of sulfuric acid per mole.

The number of equivalents depends on the chemical reaction of concern. If sulfuric acid reacted with another chemical to produce water, for example, one mole of sulfuric acid would be one equivalent, since one water molecule requires two hydrogen ions. In a similar reaction, a mole of HCl would be 1/2 equivalent. Normal solutions are prepared just as molar solutions are prepared, except that the molar concentration refers to the concentration of reactive groups, not of the parent compound.