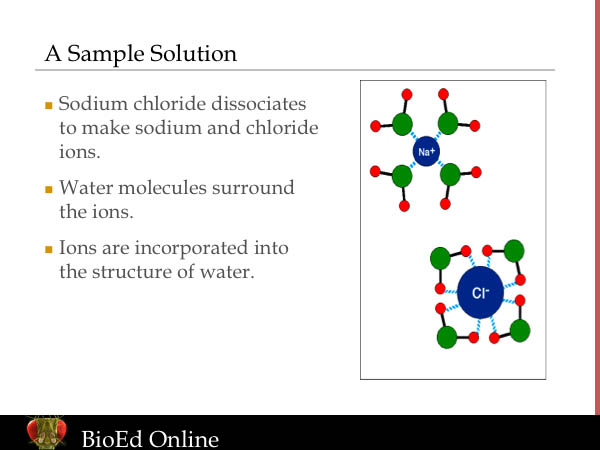 For a substance to go into and remain in solution, it must be more energetically favorable for the substance to remain mixed with water than to separate out. Solutions are stable. Gravity will take particles out of suspension, but gravity will not take a solute out of solution.

For example, sodium chloride dissociates into ions when added to water, forming a stable solution. Why?

A sodium atom readily gives up an electron to become positively charged. Because they are positively charged, sodium ions are attracted to the partial negative charge on the oxygen atoms of water molecules. Similarly, a chlorine atom gains an electron to become a negatively charged chloride ion. Chloride ions are attracted to the partial positive charges on the hydrogen atoms of water molecules. In either case, the result is a stable structure, called a hydration shell, that surrounds the ion. It isn't energetically favorable for the ion to separate from the surrounding solvent molecules.

Even in biology, not all solutions require water to be used as a solvent. For example, some solutes must be dissolved in ethanol or another organic solvent. Non-polar solutes will not dissolve in water at all. The molecular properties of solute and solvent, and how they interact, determine what combinations are most appropriate. When a potential solute is readily dissolved in a given solvent, we refer to the solute and solvent as being compatible. Sodium chloride is compatible with water. Oil is not. Which is another way of saying, "oil and water don't mix."