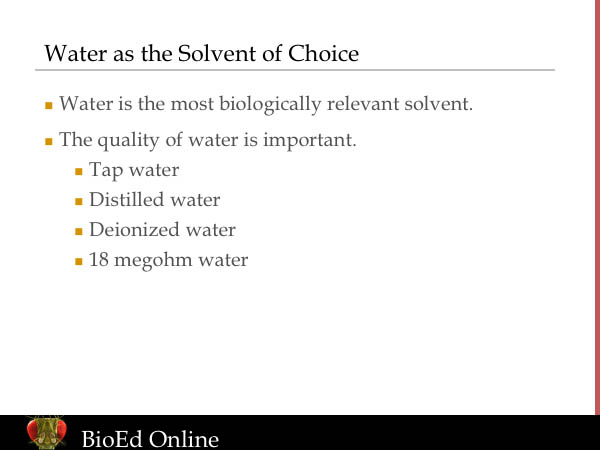 Water as the Solvent of Choice

Water is by far the most commonly used solvent in biology because it is the major component of all living organisms. Most known biochemical reactions take place in an aqueous environment, and water is frequently a reactant in, or a product of, biochemical reactions. Biologically important macromolecules, organelles, cells, and organs all are designed to function in an aqueous environment.

Water quality is highly variable, and for any task an appropriate grade of water must be chosen. For example, tap water is fine for washing dishes, but it is not recommended for making solutions because the quality of such water is unknown. Tap water typically contains sediments (suspended particles), metal and other ions, deliberately added chemicals such as chlorine or fluoride, and/or traces of organic solvents. Although tap water is generally safe for drinking and other personal uses, materials in tap water can be toxic to some cells or may interfere with assays or biochemical reactions. Therefore, tap water is inappropriate for making solutions. Also, it is recommended that glassware that has been washed and rinsed in tap water be thoroughly rinsed with a higher quality water before use in the laboratory.

Deionized water is produced by running tap water through a resin cartridge, or series of cartridges. A home deionizing system might simply replace divalent cations with sodium ions, producing what is commonly known as "soft" water. Laboratory deionized water is usually treated to remove both cations and anions, which are exchanged for hydrogen and hydroxyl ions, respectively. Deionized water often is of better quality than distilled water. However, on the downside, the resins used in the cartridges may release organic contaminants into the water.

The highest grade of water is called 18 megohm water. Eighteen megohms is 18 million ohms, which are units representing resistance to the flow of electricity. Eighteen meghoms is more than a million times the electrical resistance of a typical household electric circuit. Very pure water does not conduct electricity as well as contaminated water because it contains no inorganic ions with which to carry electric current. Eighteen megohm water is usually produced in multiple steps, including reverse osmosis and the passage of product through ion exchange resins, activated carbon beds and filters.

Pure water is somewhat acidic, with pH close to 5. It is also what we call an aggressive reagent, meaning that it will leech ions from plastic or glass containers. It does so because of the polar nature of water molecules. Ions dissolve most readily in 18 megohm water because the system (water plus dissolved ions) is more stable than when pure water is separated from soluble materials. Because very pure water accumulates contaminants during storage, it should be freshly prepared. Avoid use of plastic tubing, funnels, and especially metal containers.