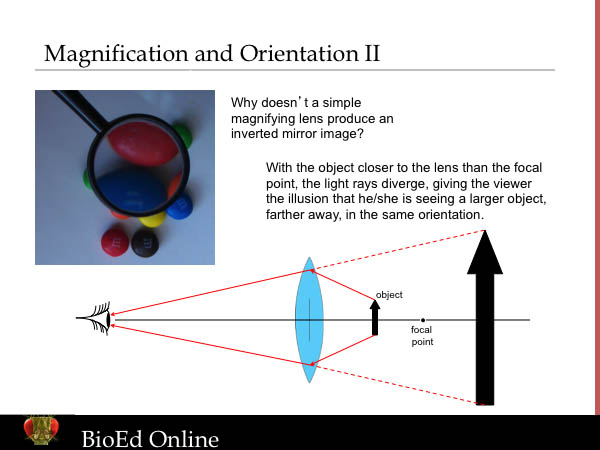 You may be wondering why the image isn't inverted and reversed when one looks through a simple magnifier. An ocular lens, or eyepiece, is a simple magnifying lens. If it inverted the image as an objective lens does, it would change the image orientation back to where it was. That isn't what happens in a compound microscope, though.

A biconvex lens projects a magnified inverted image when an object is placed in its focal plane, as we saw previously. If an object is placed inside the focal plane, that is, if the lens is placed too close to the object, then light rays from the object never converge on the opposite side of the lens. If you look through the lens at the object, though, it will look exactly as if the light rays came from a plane beyond the object. The object will appear to be farther away than it really is, and will appear magnified. The image from an objective lens is projected to a plane closer to the eyepiece than its focal plane, so that the image is simply magnified and not inverted and reversed.

So, can you use an eyepiece as you would a magnifying glass? Yes, but chances are the focal plane is so close to the lens that the object would have to be placed inside the barrel of the eyepiece to work the same as an ordinary magnifying glass. Can you use a simple magnifier to view a microscope image? Yes, but why would you want to? Eyepieces are designed to fit in the light path just right so that you can see the entire field without distortion. You might be wondering how the image reaches the eyepiece in the first place. The light path from the objective lens usually reaches a mirror or prism that projects the magnified image to a plane within the focal plane of the eyepiece, where it is then magnified.