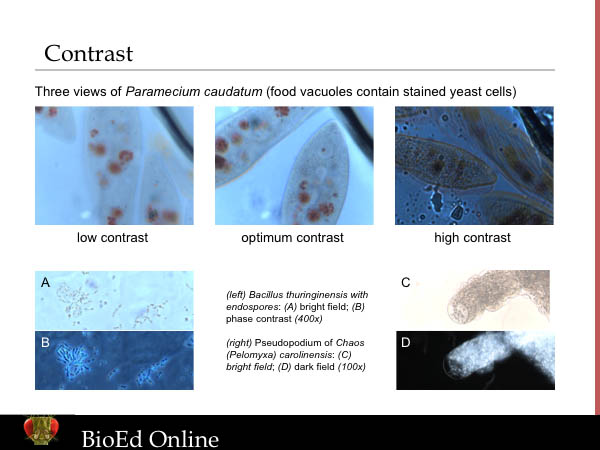 To be viewed successfully in bright field, a specimen must be thin enough to transmit light yet thick enough to absorb or scatter enough light to provide contrast. Very small, thin, and/or colorless specimens may be nearly invisible. In addition, the thickness of a specimen limits the available resolution. That is because any objective lens has a measurable depth of focus. Within a vertical distance, all parts of a specimen are in focus or close to focused, so that if structures overlap it is difficult to distinguish fine detail. Very thick specimens block too much light, resulting in an image that is nothing more than a silhouette.

The condenser is used to adjust both contrast and resolution. Bright field condensers, for example, are fitted with an aperture diaphragm that should be adjusted for optimum contrast when viewing specimens. If the aperture is wide open, one obtains a washed out image with little detail. When the aperture is stopped down there may be some dimming of the light, but more important, details in the specimen begin to appear, details that were not apparent with the aperture all the way open. When the aperture is stopped down fully, the image is often distorted. Boundaries are exaggerated and fine details are actually obscured.

With bright field microscopes, do not expect to see nearly transparent structures, such as cilia and flagella, subtle differences in regions of pseudopodia, or very thin and colorless cells, such as living bacteria. Other relatively colorless specimens may be visible, but the view will be poor compared to the view in a phase contrast or dark field microscope. On the other hand, bright field microscopes are ideal for stained and/or pigmented specimens, and they can give very satisfactory views of larger specimens at low magnification.