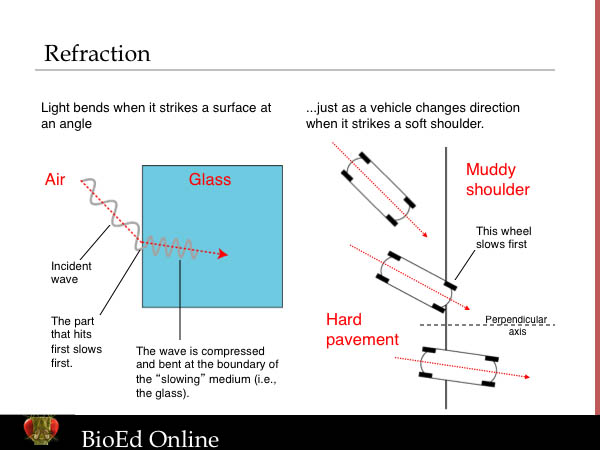 The lenses used in a compound microscope collectively magnify images by taking advantage of the refraction of light. When light enters optical glass from the air, its speed is reduced by one-third and its wavelength is shortened proportionally. When it strikes a glass surface at an angle, it not only slows but also changes direction, a property that we call refraction. The light bends because the part of the wave that strikes the glass first slows down first.

To understand the refraction of light, you might picture an automobile leaving a paved surface onto a soft shoulder. If the vehicle drives straight off the road so that both wheels hit at the same time, it slows down but does not change direction. If it hits at an angle, the first wheel to hit the soft ground slows down before the opposite wheel slows. The vehicle changes direction toward an axis that is perpendicular to the edge of the road. One side of the vehicle travels faster until both front wheels are in the mud.