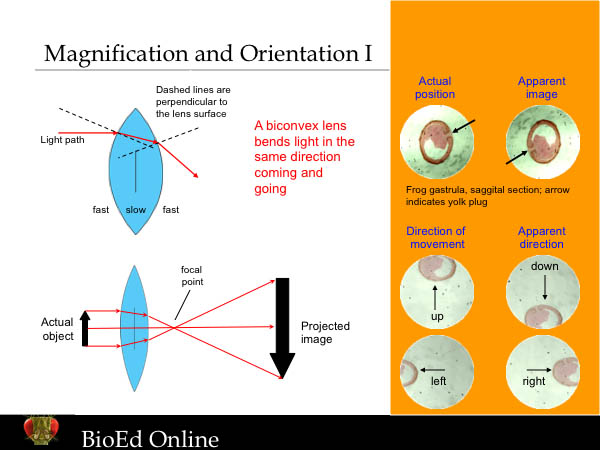 Magnification and Orientation I

Suppose that a beam of light transmitted in air strikes a curved glass surface.  It will slow down and change direction toward an axis that is perpendicular to the surface at the point of impact, then continue through the glass in the same direction.  Suppose that the beam exits a glass lens through a curved surface into air.  Because the light now travels from a slow transmitting medium to a faster transmitting medium it will now bend away from the perpendicular.

A biconvex lens is a circular piece of optical glass that is ground so that it bulges in both directions from a central plane.  Picture parallel rays of light striking the surface of the lens perpendicular to the central plane.  All such light rays will be bent toward the middle when they strike the convex surface, regardless of where they hit.  When the same light rays exit the lens they again bend toward the central axis because the surface is curved in the opposite direction.  If the surfaces are curved just right, not only does the light bend toward the central axis, but it also converges on the same spot, called the focal point.

After the light rays cross each other at the focal point the projected image of an object is upside down and reversed.  Thus we see an image as upside down and reversed when looking through a microscope.  For the same reason, if you move an object while looking into a microscope its apparent motion, either left/right or forward/back, will be opposite to its actual direction of movement.