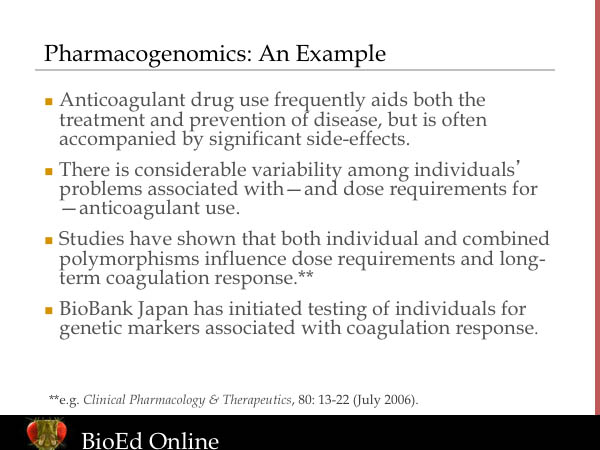 Edited Transcript from “The Pathway to Genomic Medicine,” Richard Gibbs, PhD*
I saw him [Professor Yusuke Nakamura] at the HUGO [Human Genome] Meeting in Canada last year, and he talked about warfarin sensitivity. And of course, I’m probably the least qualified person in the room to talk about this, but I discussed it briefly at a meeting last week, and I said I understood it was an empirical science to approximate the correct dosage or how much of this class of drugs you would give to particular patients. And the response was, “No, it’s not a science. It’s not even empirical.” So I guess it’s tough, right?

Now there are known genetic markers that influence, if not the direct response, then the long-term response to these drugs—the long-term coagulative response—and there’s good literature on that. The point is that in Japan, they are certainly typing these individuals for those markers ahead of time, so that as part of their clinical record, they can anticipate what might influence their therapy. What a good idea!