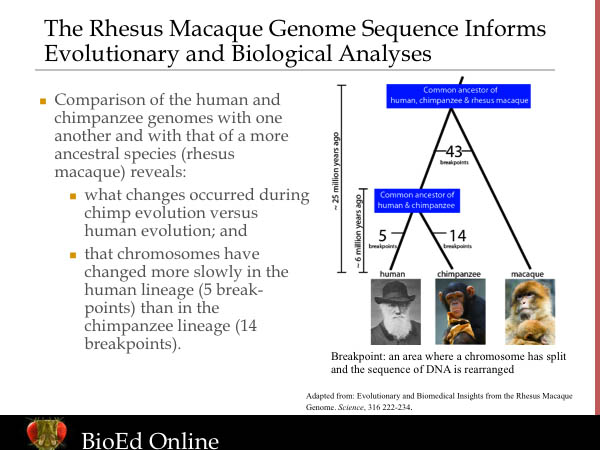 Edited Transcript from “The Pathway to Genomic Medicine,” Richard Gibbs, PhD*
So we studied the macaque, and along the way deciphered—using just its raw genome sequence and comparing it to the chimp and human genome sequence—features about the rate of primate evolution based on different chromosomal events. It turns out that as chromosomes have changed across the species tree, the changes have slowed down a little bit in the human part of the lineage, more so than in any other primate. This, together with other data, is very informative about the dynamics of these genomic changes across evolution. This is a long study; I’m not going to tell you much about it.

Another highlight was the few genes we were able to eke out of that genome by comparing it to chimps to humans, and asking, of the changes that we see, how many of those changes reflect the pattern of action of positive selection across the lineage? Because those are the genes, of course, which we suspect are most important in saying why we’re humans and chimps are chimps, and macaques are macaques.

Some of those genes have even been duplicated as the genome has gone through its efforts to make that part of the genome more conservative, more important through the evolutionary process.
* Notes in this slide presentation are adapted from the transcript of “The Pathway to Genomic Medicine,” a presentation by Richard Gibbs, PhD, given in August 2007, as part of Baylor College of Medicine’s Department of Medicine Grand Rounds Human Genetics Symposium.