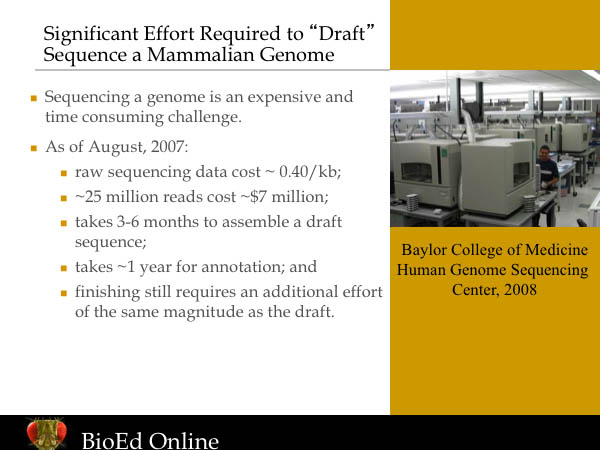 Edited Transcript from “The Pathway to Genomic Medicine,” Richard Gibbs, PhD*
So as we’re all geared to do in the genome world, we kind of make it sound easy, okay? But in fact, it’s not. It’s still an expensive and clumsy, growing science to produce whole genomes. And without going into the ugly details to prove that, to really exemplify it, I’ll just tell you that to use those machines upstairs, it still costs about 10 million dollars to generate that raw data, and it still takes six months, which is remarkable, since it was a 15-year project using multiple centers the first time.

But it’s still six months, and that’s no diagnostic test, right? And that’s just to generate the raw data. You’ve still got to get a team of people that you can barely find and train to do the assemblies and put the stuff together, and do the quality control and annotate the data, and then do all that stuff that makes a genome. And if you want a genome like the human, which is actually a very refined and high quality piece of scientific product, it’s about the same effort again to get to that finished state. So the bottom line is, this is still a raw and underdeveloped science. There’s still a lot of work to do just in this basic effort of genomics. Having said that, the programs have not been restrained in what we and they are trying to do with sequence as a basic discovery tool. And that’s illustrated by a couple of things I’m going to just mention, but not talk about in any detail today.