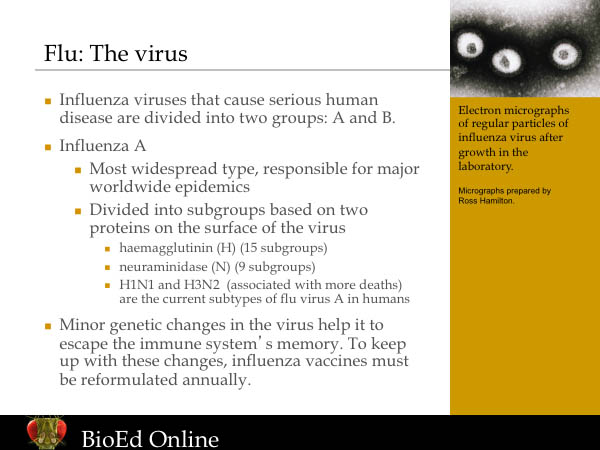 
Like all viruses, influenza viruses consist of genetic material surrounded by a protective coat. Viruses reproduce by entering a living host cell and hijacking the cell's machinery to manufacture new viruses. Flu viruses evolve very rapidly. Their genetic material consists of segments of single-stranded RNA that can be shuffled and exchanged whenever multiple viruses infect a single cell. In addition, flu virus RNA mutates at a very high rate (Smolinski, et al., 2003).

Human influenza viruses are divided into two main groups, type A and type B. Type A viruses are found in ducks, chickens, pigs, whales, and humans, among other animals. Type B viruses are known to circulate only among humans. An additional form of the virus, Type C influenza, has been identified in humans, pigs and dogs, but has not yet caused serious disease or epidemics in humans.

Influenza Type B viruses are not divided into subgroups, but A viruses are categorized into subtypes based on two important proteins present on the surface of the virus. In general, influenza type A virus is round (although it can be elongated or irregularly shaped). It is surrounded by a protein layer and a two-layered lipid envelope from which different kinds of protein spikes protrude. Two of these proteins-hemagglutinin (H), a protein that helps the virus attach to host cells in the respiratory tract) and neuraminidase (N), which releases the newly created influenza virus from host cells-are variable. Types of Influenza A virus are based on variations in the hemagglutinin (H), of which there are 15 subgroups, and neuraminidase (N), of which there are 9 subgroups. Most of these subgroups are found only in bird populations. At this time, only three of the 15 H subtypes have infected humans. Currently, subtypes H1N1 and H3N2 are the active forms of human Type A influenza virus. The H3N2 subtype was responsible for the epidemic of "Hong-Kong" flu in 1968. The outbreak of "Bird" flu in Hong Kong was attributed to H5N1, however, this subtype was not shown to be transmissible form person to person (only from birds to humans).

Immunity is based on the body's ability to identify the viral surface proteins, hemagglutinin and neuraminidase. Antibodies produced by the immune system that fight one type or subtype of influenza confer very limited or no protection against other types. Since the viruses mutate rapidly, vaccines must be reformulated from year to year to be effective.