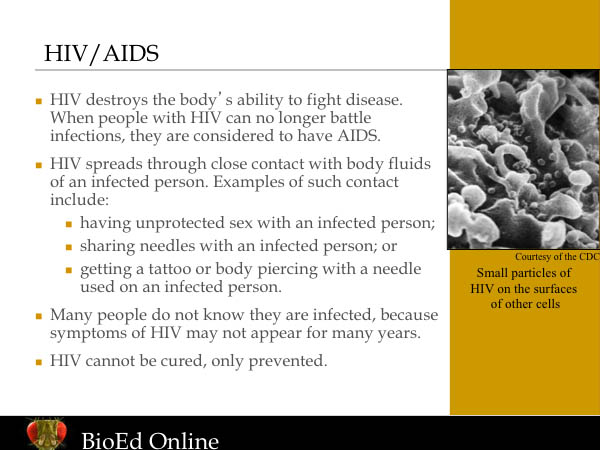 HIV/AIDS refers to infection by the human immunodeficiency virus, which destroys the body’s ability to fight infections and cancers. HIV can be transmitted through any close contact with the body fluids, such as blood or semen, of anyone who has the virus. It also can be transmitted from HIV-infected mothers to their children. Transmission most frequently occurs during unprotected sexual acts or when sharing needles to inject intravenous drugs. An existing infection with another STD increases the risk of contracting HIV, because the HIV virus can invade the body through tiny sores caused by the other STD. Appropriate use of latex (or polyurethane) condoms reduces the risk of contracting or spreading HIV through sexual activity.

According to the National Institutes of Health, “there is no evidence that HIV is spread by contact with saliva or through casual contact, such as shaking hands or hugging, or sharing of food utensils, towels and bedding, swimming pools, telephones, or toilet seats. HIV is not spread by biting insects such as mosquitoes or bedbugs.”

The first signs of HIV infection generally occur a month or two after infection, and may be similar to symptoms of flu. Severe symptoms may not appear until many months or years later. More advanced stages of HIV infection—during which people are susceptible to many life-threatening diseases, including some forms of cancer—are referred to as acquired immunodeficiency syndrome (AIDS). Treatments now exist to fight HIV infection, but the virus always is deadly. HIV infection can be detected with a blood test.