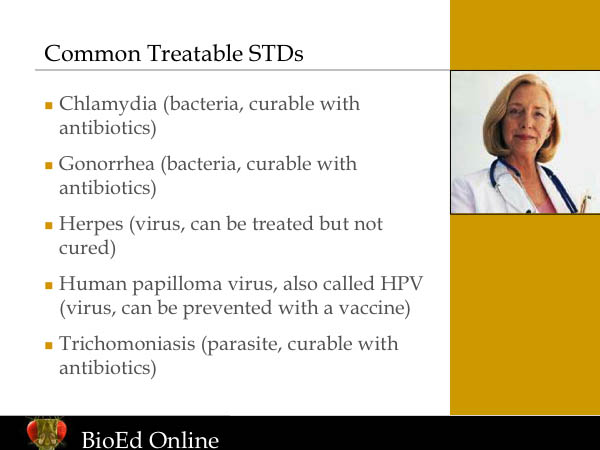 There are more than 20 types of known sexually transmitted diseases. These illnesses pass from one person to another, primarily through sexual contact, and can be caused by bacterial, parasitic or viral infection. The spread of many of STD-causing microorganisms can be prevented by the avoidance of sexual activity, or reduced by the proper use of latex (or polyurethane) condoms for all sexual contact. Prompt screening for and treatment of common STDs, such as chlamydia, also reduces the risk of spreading or contracting a more serious infection, such as HIV.

Chlamydia, the most commonly reported bacterium-related STD in the US, is caused by the bacterium, Chlamydia trachomatis. An estimated 2.8 million Americans are infected with chlamydia each year, but many do not seek treatment because the symptoms often are mild or absent. The highest rates of infection are among adolescents between 15 and 19 years of age. Chlamydia can spread during any kind of sexual contact; the risk of infection can be reduced by correct use of latex (or polyurethane) condoms. Even though initial symptoms may be negligible, the infection is particularly dangerous to women, because it can damage a woman’s reproductive organs and cause serious problems, such as infertility, ectopic (outside the uterus) pregnancy and recurrent pelvic pain. Chlamydia can be treated and cured effectively with antibiotics.

Human papillamoviruses (HPV) are common viruses that cause warts. About 30 types of HPV are transmitted sexually, and as many as 24 million Americans are infected. Some forms of HPV are linked specifically to the development of cervical cancers in women. Precancerous changes in the cervix can be detected by a Pap smear (a simple test performed in a doctor’s office). A new vaccine, Gardasil®, protects against four types of HPV that collectively cause 70% of HPV-related cervical cancers and 90% of genital warts. Correct use of latex (or polyurethane) condoms reduces, but does not eliminate, the risk of contracting or spreading HPV infection.