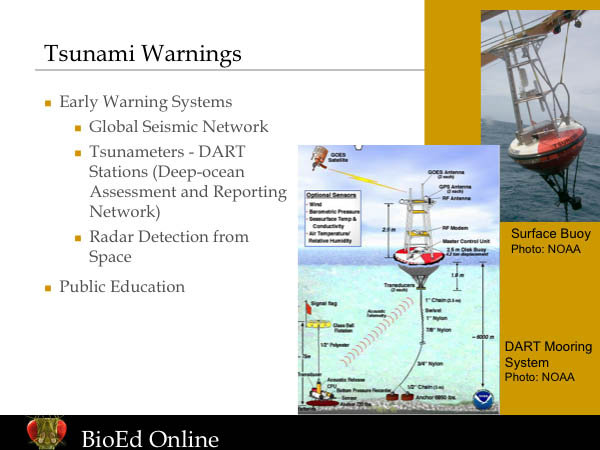 When discussing early warning systems, it is important to remember that geological events can trigger tsunamis so close to shore that the waves arrive onshore only minutes later. In such cases, no warning system would be effective. However, tsunami warning systems could be highly beneficial in instances where there are hours before the potential waves make landfall.

Seismographs detect earth movements from sudden displacements in the ocean floor or volcanic activity. They provide a first line of defense, alerting monitoring stations of seismic events large enough to generate a tsunami. Unfortunately, these alerts can raise false alarms, which may do more harm than good. Not only are evacuations costly, but after a series of false alarms, the public tends to ignore warnings.

Tsunameters were developed by Project DART at NOAA's Pacific Marine Environment Laboratory. They acquire critical data for real-time forecasting via six systems that have been deployed to oceanic regions with a history of generating tsunamis that could threaten U.S. coastal communities.

For the first time, during the December, 2004 Indian Ocean tsunami, radar satellites detected and recorded the height of tsunami waves. This is an important technology that may be incorporated to improve early warning systems.

In addition to early warning systems and technology, public information must be available in all areas at risk of tsunamis. Useful information might include: which local areas are in the danger zone; the height of public and private buildings and dwellings; and how to make evacuation plans with family members, including the supplies to have on hand, and where to obtain assistance after the event. Also, it is important for the public to be aware that the behavior and duration of tsunami waves can vary greatly from one event to the next. Thus, it is critical to heed instructions from local officials.