Our Sense of Hearing 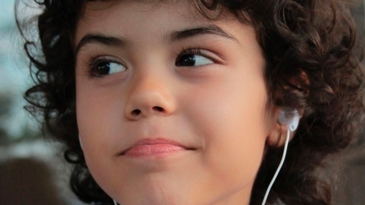 Students investigate hearing and discover that sensory receptors in the ears collect sound information and transmit it to the brain, and that the effects of sound can be seen using a tuning fork and water.

This activity is from K-1: The Senses Teacher's Guide. While designed for students in grades K-1, it may be used with students in Pre-K and grade 2.

Download the activity slide set, What Sound Is It? which contains embedded audio files for use with this activity.

Sound is produced when an object vibrates in air (or another medium, such as water) and produces alternating bands of high and low pressure, known as sound waves (or compression waves). Sound waves possess very low levels of energy, but our ears and brain are able to detect the frequency and loudness of many sounds, and to locate sound sources.

The human ear is designed to collect sound waves and detect minute changes in air pressure outside the body. The outer ear consists of the ear flap and a short passageway, known as the auditory canal. The eardrum, or tympanic membrane, is located at the inner end of the auditory canal. It bulges inward or outward in response to pressure changes caused by sound waves. The three tiny, interconnected bones of the middle ear (malleus, incus, stapes) amplify this movement.

Another membrane separates the middle ear from the inner ear, a complicated labyrinth of interconnected fluid-filled chambers and canals called the vestibular system. The upper group of canals is critical to our sense of balance. The lower canal, known as the cochlea, is coiled like a snail shell and filled with fluid. It converts pressure waves into impulses that are sent along sensory neurons to the auditory centers in the brain. A special part of the cerebrum receives and interprets information about sound.

Humans and many other species have specialized organs to produce sounds, such as those in speech or songs, which are important for communication. Most mammals, reptiles and amphibians have a larynx, or voice box, in their necks. The larynx contains the vocal cords, which produce sound as air is expelled from the lungs. The tongue, lips and mouth also have important roles in configuring the sounds produced.

Create a simple instrument to observe vibration and sound production. String three large rubber bands around a tissue box. Pluck the rubber bands near the hole of the box. Have students observe what happens. Then, ask, Are the rubber bands moving back and forth? What is this motion called? Is this vibration producing a sound?