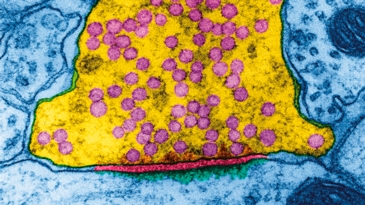 Students conduct a simulation to demonstrate how multiple incoming signals influence the action of neurons.

Most neurons in the brain communicate with each other by releasing chemical messengers called neurotransmitters. Neurotransmitters cross the gaps between neurons or between neurons and other cells, such as muscle, and match up with specific receptors. Chemical signaling between neurons allows different kinds of messages to be sent. For example, some chemical messengers stimulate neurons to fire, while other messengers make it harder for an electrical impulse to be generated in the receiving neuron. Since one neuron can share synapses with thousands of other neurons, the combined effects of different messages ultimately determine whether a signal will be triggered or not.

Many drugs interfere with communication between nerve cells. Some drugs act directly on neurons, neurotransmitters and receptors. Curare, for example, is a deadly poison used by South American Indians. It causes death from paralysis by blocking receptors on muscle cells. Since the receptors are blocked, the real chemical messenger for muscle contraction (acetylcholine) can no longer stimulate the muscles to contract.

Drugs also can interfere with communication between neurons in other ways, such as by preventing the manufacture or release of neurotransmitters, by causing excessive firing of neurons by stimulating
massive releases of neurotransmitters, by mimicking the effects of chemical messengers, or by preventing the normal breakdown and recycling of chemical messengers.

This activity will help students learn about the relationships between chemical messengers, receptors and the actions of common chemicals in alcoholic beverages, cigarettes and illicit substances on brain functions.

Encourage students to learn more about how different chemicals affect the brain by conducting research in the library on the Internet. A good place to start is the National Institute on Drug Abuse (www.drugabuse.gov).