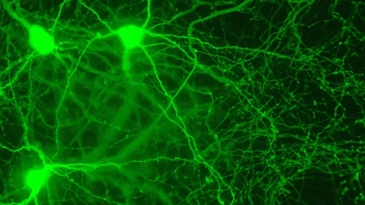 Students describe stressful situations they have experienced, and how their bodies responded to those events.

Stress is a common human condition. Most of us can recognize the symptoms: feelings of nervousness, sweating of the palms of the hands, pounding of the heart, or a dry mouth. These are signs that the body is preparing for a difficult situation in which survival may be at stake. Remarkably, our bodies’ reactions to stress are controlled by the brain. Immediate stress responses are directed through pathways in the brainstem and spinal cord to the major internal organs of the body. However, chemicals circulating in the bloodstream also help prepare the body to handle a crisis. The brain coordinates the release of these chemicals, which belong to the family of messengers known as hormones.

Unlike the chemical messengers between neurons (neurotransmitters), hormones can have wide-reaching effects on many different body tissues at the same time. Hormones, which circulate in the bloodstream, act as messengers to the nervous system and other tissues in the body. They act only on cells that have compatible receptors.

Hormones have many vital functions in mammals, such as regulating digestion; controlling the metabolism of sugars, proteins and fats; and regulating growth and development. Many of our most basic drives—sleeping, hunger, thirst, sex—are regulated through hormones.

The master control system for all hormones is located within the brainstem. Known as the hypothalamus, this small structure interconnects with many regions of the brain. It is adjacent to the pituitary gland, which produces hormones that control other glands in the body. Together, the hypothalamus and the pituitary gland regulate many different body functions. During periods of stress, these tiny structures direct the two small adrenal glands near the kidneys to produce hormones, such as adrenaline (also called epinephrine), that prepare the body for action.

Different species of animals react differently to dangerous situations. Some animals flee, while others become motionless so that they blend into the background. Some look for a safe place to hide, and still others wait for an opportunity to fight. Have students investigate the habits and lifestyles of various animals to learn how the animals react to life-threatening scenarios, and how the responses are related to 1) each animal’s specific characteristics (fast runners, good fighters, etc.), and 2) the characteristics of the environments in which they live.