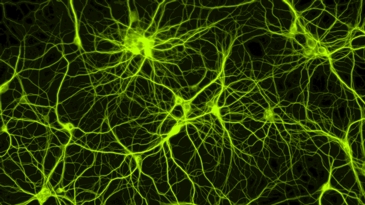 Students create an electrical circuit and investigate whether or not different dissolved substances conduct electricity.

Neurons communicate with one another and with other cells, such as muscle cells, by sending signals along the length of a special type of output fiber known as an axon. More than a century ago, biologists discovered that these signals, also known as nerve impulses or action potentials, involved electricity. At first it was believed that electricity flowed through axons much as it travels along a wire. However, further investigation revealed that electricity does not flow passively through axons. Rather, electrical signals are actively transmitted along the length of axons.

Eventually, biologists discovered that electrical impulses are transported along the cell membranes of axons. Chemical changes along the length of the membrane cause an electrical charge to move along the length of the axon. This movement resembles a line of dominoes, in which each domino triggers the next one to fall. Once the signal reaches the end of the axon, it is passed to the next nerve cell either electrically or by a chemical messenger that crosses the synaptic cleft between nerve cells.

Movements of sodium, one of the components of salt, help generate the electrical charge that travels along the neuron membrane. Potassium, chlorine and calcium also are involved. This activity helps students observe the relationship between certain substances dissolved in water and the conduction of an electrical signal.

Students will build a circuit that connects a bulb to a battery. Electricity, which is the movement of electrons (negative charge), will flow from the negative terminal to the positive terminal.

Students will use their setups to investigate whether distilled water conducts electricity and compare the results to those achieved with salt water and sugar water. Students also will test the conductivity of a sports drink. Pure water is a poor conductor of electricity. However, when salt is added, water conducts electricity very efficiently. Dissolved salt (NaCl) separates into negatively charged atoms (chloride ions, written as Cl-) and positively charged atoms (sodium ions, written as Na+). The current is carried by Cl- ions, which migrate toward a wire connected to the positive terminal of a battery.

Salt is an important part of the diet for humans, but it has not been plentiful at all times throughout history. Have students investigate the roles salt has played in human culture, civilization and politics.