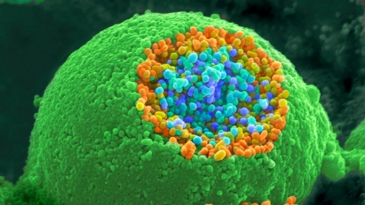 Students play a simple card game to learn the sequence of events involved in transmitting signals through the nervous system.

Each of the billions of neurons in the nervous system communicate with one another and with other cells, such as muscle cells, through special junctions known as synapses. Some neurons share synapses with thousands of other cells. Others connect with only a few cells. As noted earlier, nervous system signals travel along the cell membranes of individual neurons, but what happens at the ends of neurons? How does a signal move across the synapse to other neurons? The answers to these questions involve highly efficient mechanisms that allow signals to be transmitted from neuron to neuron.

Nervous system signals generally travel in only one direction along a neuron. Signals are received on dendrites or on the cell body and trigger an electrical impulse that moves along the axon. Once the signal reaches the end of the axon (or axon terminal) of a neuron, it must move through the synapse to the next neuron. At the most common type of synapse, known as a chemical synapse, the impulse triggers the release of chemical messengers, called neurotransmitters, from special pockets known as vesicles. Neurotransmitters released from the vesicles leave the cell and physically move through the narrow watery space (the synaptic cleft) between neurons. The space between neurons is about 20 nanometers (one nanometer equals 0.000,000,1 centimeters). Once on the other side of the gap, the neurotransmitters attach to special receptor molecules on a dendrite or on the cell body of the receiving neuron. The joining of the neurotransmitters to their specific receptor sites can promote the generation of a new electrical impulse (the neuron “fires”) OR the neurotransmitters can have an inhibitory effect, making it harder for the neuron to fire.

Biologists have identified more than 100 different neurotransmitters. Each has a different three-dimensional shape, which fits only a certain kind of receptor site. The relationship between a neurotransmitter and its receptor is similar to that of a key and a lock.

The story does not end, however, with the binding of the chemical messengers to receptors on the next neuron. If the messengers remained in place, no new signals could be received. Thus, mechanisms to remove the messenger from the synapse also exist.

Sometimes, neurons do not communicate through neurotransmitters. Instead, an electrical charge passes directly from neuron to neuron through what is known as an electrical synapse. This type of signaling,in which the communicating neurons are very close together, is very fast and allows many interconnected neurons to fire at the same time. Electrical synapses are less common than chemical synapses, but they are very important for the normal development and function of the nervous system.