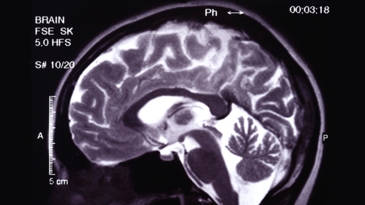 An MRI of a normal brain reveals the different regions of the brain.
© Mikhail Basov.

Students are introduced to the structure of the brain, and complete a pre-assessment that measures how much they already know about the brain and nervous system.

The brain of the average adult weighs about three pounds and fills over half the skull. Even though it is soft (like pudding), the brain can be divided into several regions, each with very specific functions.

The cerebrum, about 85% of the brain’s mass, sits above the brainstem and cere­bellum. The surface of the cerebrum, known as the cerebral cortex, has bumps (gyri) and grooves (sulci). The cerebrum enables one to think, learn, reason, remember, feel sensations and emotions, and move muscles purposefully. It is comprised of two hemispheres (or halves), separated by a deep fissure. The hemispheres are connected by a large bundle of nerve fibers known as the corpus callosum. They communicate with each other constantly. Even though the hemispheres may look the same, they are somewhat specialized for certain functions. For example, in most people, the ability to form words is a function that seems to be located within the left hemisphere, while the right hemisphere is better at processing spatial information. Different parts of each hemisphere handle specific functions, including hearing, vision, speech, memory, decision making and long-term planning.

The cerebellum sits at the back of the brainstem and is about the size of a tennis ball. It helps us maintain balance and posture, and coordinates our movements. The cerebellum also plays an important role in our ability to learn and remember new motor skills, such as riding a bike.

The limbic system is comprised of a number of interconnected brain regions, including areas within and under the cerebral hemispheres. It is involved in many emotions and motivations, especially those related to survival, such as anger, fear, and even the fight-or-flight response. The limbic system also plays an important role in feelings of pleasure, such as those experienced from eating and sex.

The brainstem connects directly with the spinal cord and is responsible for automatic functions of the body, including heartbeat, digestion, breathing, swallowing, coughing and sneezing. Automatic functions are present at birth and happen without thinking about them.

The brain’s main communication channel to the rest of the body is the spinal cord. Nerves branch out from the spinal cord and send and receive information.

Functions and abilities develop as the brain grows and matures. The human brain generally reaches close to 80% of its adult weight by the age of two or three, yet it continues to develop throughout adolescence and early adulthood. The region of the cerebral cortex responsible for judgment, organization and reasoning appears to be one of the last brain areas to reach maturity.