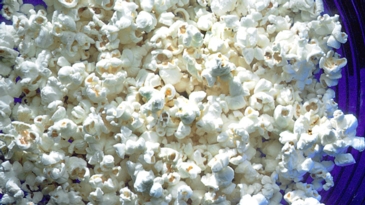 Courtesy of the National Cancer Institute.

Students use popcorn of different colors to model the composition of air. They learn that (1) gases occupy space, (2) air is a mixture of different gases, and (3) the oxygen needed by the human body is not the principal component of air. Student sheets are provided in English and in Spanish.

About 78% of the volume of dry air is nitrogen gas (N2). Oxygen (O2), the component of air required by our bodies, comprises less than one fourth of dry air. Argon, a non-reactive gas, makes up slightly less than 1% of dry air. Carbon dioxide (CO2), a gas released from our bodies when we exhale, is present in even smaller quantities (less than one part per 1,000). Very minute amounts of many other naturally-occurring gases (such as neon, helium, methane and ammonia), as well as gases resulting from pollution, are present in air. Water vapor, when present, can occupy up to 5% of the total volume of air. When we breathe, nitrogen, oxygen and all the other components of air enter and exit our lungs.