Fossil Fuels and the Carbon Cycle 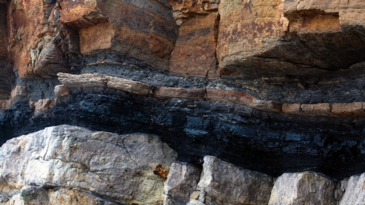 Coal seam in a cliff that is approximately 335 million years old.
© David Shand. Used with permission.

Students learn how geologists locate fossil fuels by using a straw to extract "core samples" from a model that has different layers. Student sheets are provided in English and in Spanish.

In the United States, more than 75% of the energy used in homes and businesses, and for transportation comes from coal, oil or natural gas. These fuels are known as “fossil” fuels because they are the remnants of ancient plants and other living things buried under intense heat and pressure over millions of years. They are very efficient sources of energy. However, it is important to keep in mind that the energy in fossil fuels originally came from the sun and was trapped by plants and similar organisms during photosynthesis. During this process, plants also consumed carbon dioxide (CO2) from the atmosphere. So when fossil fuels are burned, trapped carbon is released back into the atmosphere, principally as CO2.

When geologists look for fossil fuels, they often drill deep into Earth. They remove narrow cores of rock and sediments and examine them for clues about the presence of oil and other fuels. This activity lets students explore the layers in a muffin representing Earth’s crust, using a straw to drill “cores.”