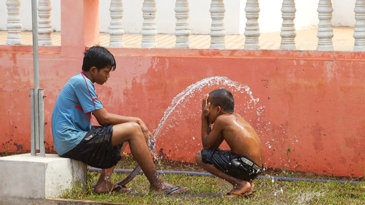 Children play with a water hose to cool off from the heat in Cambodia.
© Stephen Bures.

Students learn about Earth’s major climate types, how climate affects people's lifestyles, and impacts of climate change. Student sheets are provided in English and in Spanish.

This activity is from The Science of Global Atmospheric Change Teacher's Guide. Although it is most appropriate for use with students in grades 3–5, the lessons are easily adaptable for other grade levels. The guide is also available in print format.

We don’t often think about it, but many aspects of life are determined by climate, the characteristics of the weather in a particular region over long periods of time. Climate determines which kinds of plant and animal life are present, which crops can be grown, how people build their houses, and, to a great extent, people’s clothing and diet.

On Earth, there are three major climate zones, determined by distance from the equator. The zone nearest the equator—the tropical zone—is warmest because it receives the most direct radiation from the sun. The zones closest to each pole—the polar zones—are the coldest because they receive the least direct radiation. The broad areas between the tropical and polar zones—known as the temperate zones—generally have snow or rain during cool or very cold winters. The temperate zones lie between 30° and 60° latitude in both hemispheres.

Factors other than latitude also affect climate. Nearness to an ocean usually keeps temperatures cooler in summer and warmer in winter. Altitude also influences temperature; mountainous areas are colder than sea-level regions at the same latitude. In addition, rainfall varies from region to region depending on wind patterns and characteristics of the land. Some parts of the world receive little or no rainfall. Most of these desert areas are located near or within the tropical zone. Other parts of the tropical zone receive large amounts of rain during certain seasons.

Most scientists are concerned that human activities are modifying Earth’s climate. The addition of greenhouse gases, such as carbon dioxide, may lead to increases in global temperatures (global warming). This could cause changes in rainfall and temperature patterns in many parts of the planet, with enormous consequences for ecosystems, cities, and agriculture.

The release of chemicals known as CFCs (chlorofluorocarbons) is also contributing to atmospheric changes that affect climate and human health. Freon and other CFCs are greenhouse gases that contribute to the trapping of heat near Earth’s surface. Chlorine molecules released by these chemicals in the stratosphere break apart the ozone molecules that shield Earth from ultraviolet radiation. Over the last decade, the amount of ozone in the stratosphere has decreased (especially in the polar regions), leading to greater risks of skin cancer for people and also damaging vital populations of plants, animals, and marine life.

This activity is designed to raise students’ awareness of how climate influences all aspects of people’s lives.

Begin the activity with a whole-class discussion, and then have students work in groups of 4.