Rainbow in the Room 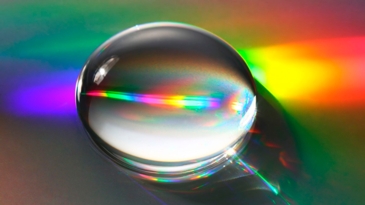 A drop of water acts like a prism.
© Mariano Ruiz.

Students learn about colors, prisms, and light, and draw their own rainbows in the proper color sequence. Student sheets are provided in English and in Spanish.

This activity is from The Science of Global Atmospheric Change Teacher's Guide. Although it is most appropriate for use with students in grades 3–5, the lessons are easily adaptable for other grade levels. The guide is also available in print format.

Light that we can see is just part of the entire spectrum of radiation produced by the sun (electromagnetic radiation). The sun bombards Earth with radiation of many different wavelengths at the same time. Some radiation emitted by the sun can be classified as infrared (which we feel as heat) or visible (which we see as light and color). However, the sun also produces higher energy radiation, such as ultraviolet (UV) radiation, x-rays, and gamma rays.

Radiation from the sun, including light, behaves as if it travels in waves. The distance between wave crests (wavelength) and the speed with which they pass a fixed point (frequency) are related to the amount of energy contained in photons (basic units of light) that make up the wave. Radiation of shorter wavelengths (which travel at higher frequencies) has more energy than radiation of longer wavelengths. Visible light falls between the longer wavelengths of infrared radiation and shorter, higher-energy wavelengths of UV radiation.

Visible light consists of a mix of wavelengths that we detect as different colors. We can see these colors when white light (light as we usually see it) passes through a prism—or drops of water—and forms a rainbow.