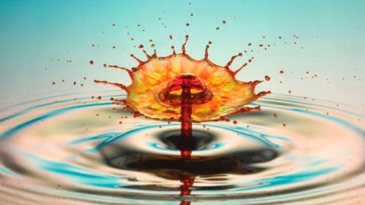 Students explore and compare the physical properties of water and oil. Student sheets are provided in English and in Spanish.

This activity is from The Science of Water Teacher's Guide. Although it is most appropriate for use with students in grades 3-5, the lessons are easily adaptable for other grade levels. The guide also is available in print format.

Water molecules are attracted to each other because, in many ways, they act like tiny magnets. Each molecule in liquid water has a positive end and a negative end. The forces of attraction between these opposite charges bring the molecules together very tightly. Attraction among molecules of the same kind is called cohesion.

The forces of attraction among the molecules in most liquids are not as strong as those that occur among water molecules. The “stickiness” of water accounts for much of its behavior, including the formation of rounded droplets and its ability to creep upward inside a narrow tube (capillary action).

In this activity, students discover some of the unique qualities of water and compare and contrast water with another liquid (mineral or salad oil) that behaves differently.