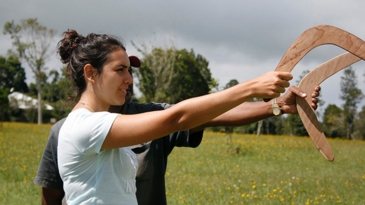 Student in Australia learning how to throw an Aboriginal-style boomerang.
© Small World Journeys. Used with permission.

Most students may envision boomerangs as wooden throwing sticks, but these fascinating flying devices can be made of many different materials, including metal, plastic and even paper. Some boomerangs are designed to return, but others do not. Both tools have been used for millennia.

The returning boomerang was raised to a high art by the Australian Aborigines. It was used for hunting, and as a battle club, musical instrument and even fire-starter. Hunters would throw returning boomerangs near roosting birds, seeking to scare them into flight so they could be caught in nets. Hunters also would throw boomerangs through flocks of flying birds, hoping to clip a wing and bring down dinner.

Both forms of boomerang are amazing aeronautical devices, basically rotating wings curved like an airfoil. All non-returning boomerangs are straight, but the returning variety can have many designs. The classic returning boomerang has a lazy “L” shape, but some look like a question mark. Some returning boomerangs have three or four wings (like a cross). The different features determine how quickly a boomerang returns when thrown. Large, open designs tend to travel furthest, while tighter shapes and boomerangs with extra wings tend to follow shorter paths.

Several physical processes make a returning boomerang work: aerodynamic lift, gyroscopic precession, drag and gravity. The proper way to throw a boomerang is in a vertical plane, tossed slightly upward and with a rapid spin. The spin produces a gyroscopic effect that keeps the boomerang moving along its plane without flipping and fluttering. As the boomerang travels forward, the rapid spinning of its wing tips produces a strong lifting force. Because the boomerang is oriented vertically, the lift pushes sideways, causing the boomerang to turn and return to the thrower.

The forces influencing the flight of a boomerang are similar to the gyroscopic effect that keeps a bicycle upright and stable. To turn a bike, the rider merely tilts to one side or the other. This puts a sideways force on the spinning wheels, causing them to turn in the direction of the rider’s lean.

Will a boomerang always come back, no matter how it is thrown?

Lead a class discussion on how boomerangs can be improved. Ask, What can be done to make your boomerangs stay in the air longer or travel out farther? What other materials might be used to make boomerangs?