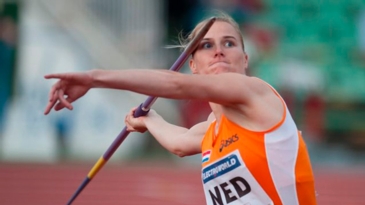 Student teams construct javelin rockets and use them to investigate the relationship between launch angle and the distance an object travels.

This activity is a common personal challenge. Through experience, we learn to throw a ball at the correct angle and speed to reach our target.

Of course, many sports involve throwing or hitting balls or other implements as far and accurately as possible. In baseball, a center fielder has to pick up a ground ball and throw it at the right angle and speed to the catcher waiting at home plate. A quarterback must be able to pass the football to a receiver running full speed toward the end zone. A golfer selects a driver with the right angle on the club face to launch a golf ball toward the hole. Athletes who throw javelins try to throw a javelin farther than their competitors.

In this activity, student teams will construct javelin rockets and use them to investigate the relationship between launch angle and range. They will discover that the best launch angle for the javelin also is the angle at which a ball should be thrown or hit to travel the maximum distance.

Does launch angle affect the distance a javelin rocket travels?

What To Do: Ball Toss

What To Do: Build/Test Javelin Rockets

Ask your students, What is the best launch angle for long-distance flights? If they can’t agree on a number, average students’ responses. Compare their results to the actual ideal angle: 45 degrees. Anything more or less than 45 degrees will produce shorter flights (see illustration, PDF). Ask, How does this discovery apply to sports? (Throwing or hitting a ball the longest distance requires launching it upward at an angle of 45 degrees.)

Hold a launch competition. Set a basketball or other target on the floor about 10 meters from a launch line. Challenge students to hit the target—on the fly—with their rockets (sliding into the target does not count). Instruct students to adjust their launch angles as needed to reach the target. To launch the rocket with more or less force, students also can change how far back they pull their launchers before release.