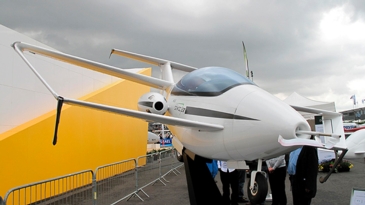 Students make and test flying tubes, called ring wing gliders, as they learn about Isaac Newton’s Third Law of Motion and use an engineer's approach to problem-solving.

This activity introduces students to engineering practice and encourages them to think like engineers. Students will learn about factors that affect flight as they design and build two types of flying cylinders. Then, they will use “An Engineer’s Approach” page to test and improve their gliders.

Airplanes come in many sizes and shapes. Most have a body, one or more sets of wings, a tail section and one or more engines. As long as the plane achieves flight, almost anything goes!

Aeronautical engineers must account several factors when designing a new airplane: lift, weight, thrust and drag. These are called the four forces of flight.

Lift is what gets an airplane off the ground. In most planes, lift is generated by the shape of the wings. As a plane moves forward, its wings push air downward. The downward push is known as an “action force.” Simultaneously, the airplane experiences an equal and opposite “reaction force” that pushes it up. Aeronautical engineers call this reaction force “lift.”

Most airplane wings are curved on top, flat on the bottom and tilted slightly downward towards the back. The forward edge of the upper surface is rounded, while the backward edge of an airplane wing is gently sloped. As a plane moves forward, some air moves above its wings and some flows beneath the wings. Because the upper surface is curved, air pressure over the wing is reduced by the airflow. This causes the air to bend downward as it passes the wing’s trailing edge, producing a downward force. At the same time, air beneath the wing also is pushed downward by the slightly tilted underside. The downward force produced by the upper and lower wing surfaces creates the opposite and equal force that lifts the plane off the ground (see illustration, PDF).

The faster the airplane moves forward, the greater the lift produced. This is why an airplane accelerates on the runway. When speed and lift have increased to sufficient levels, the plane will become airborne. Conversely, a plane coming in for a landing must be slowed to reduce lift. To compensate for the lower air speed, the pilot tilts segments of the wings downward, thereby pushing more air from under the wings and maintaining sufficient lift to prevent the plane from falling out of the sky.

A second force, weight, opposes lift. Weight is the measure of gravity’s effect on the airplane’s mass. Earth’s gravity “pulls” the plane down toward the ground. To overcome the force of gravity and achieve flight, an airplane must generate more lift than the total weight of the plane, its fuel, and all its contents. If an airplane loses its lift, weight (gravity) causes it to come crashing down.

The other two forces of flight are thrust and drag (see illustration, PDF). Thrust is the forward force created by the propellers or jet or rocket engines as they blow air or exhaust backward to propel the plane. Drag—friction with the air while a plane is moving forward—works in the opposite direction. To fly forward, an airplane must produce thrust greater than the forces of drag impeding it. Aeronautical engineers try to streamline their airplane designs so that planes cut through the air smoothly. A plane with a lot of drag will not be very efficient. As long as lift is greater than weight and thrust is greater than drag, any shape of airplane will fly.

In this activity, students will make and test flying tubes, called ring wing gliders. Students’ muscle power will provide thrust, and lift will come from their gliders’ shape.

Hold a class discussion about the potential of ring wings for future airplanes. Ask, What are the advantages and disadvantages of this design? How would the planes look? Would you want to fly in one?