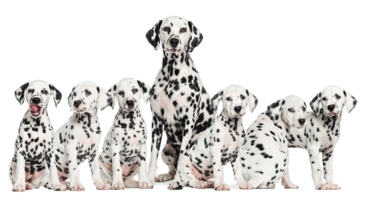 Students learn about three examples where genetic mutations are related both to desirable characteristics and to harmful effects in certain dog breeds. Students place themselves in the roles of different individuals involved with dog breeding, health and care, and report on the relevance of canine genetic testing for each of the roles.

More than 1,000 tests have been developed to look for desirable or harmful gene alleles in dogs. Once a researcher has found a particular gene mutation or biochemical marker for a mutation, university-based or commercial laboratories develop tests for different versions of the gene. In the case of coat color, breeders use genetic testing to produce offspring with certain coat colors or patterns of markings. Many canine genetic tests screen for alleles that cause diseases, either immediately or as a dog becomes older. In some cases, genetic tests identify alleles that convey increased risk of developing a disease—depending on diet and other environmental factors. Of course, these technologies and approaches are based on the growing range of genetic tests available for humans.

In this activity, students learn about three mutations that can be harmful in dogs. The first mutation is found in whippets and other breeds of dogs. The mutation affects a muscle protein (myostatin), such that dogs with one copy of the mutated allele are able to run faster (genotype Bb). Dogs with two copies of the mutation (BB), however, have an unusual body shape, bulky muscles, an overbite, shorter legs and thicker tails. This is another example of a single gene influencing many physical traits—because of its roles in different body systems. Bully whippets are not valuable as racing or as show dogs. Thus, one copy of the mutated allele produces dogs with an advantage in racing. However, dogs with two copies are undesirable as racing or show dogs.

The second example focuses on the dappled or mottled coat pattern called merle, which is present in many dog breeds, including Australian Shepherds. The allele that produces the desirable merle color markings is a version of a gene important for development of several systems during growth of the embryo. One copy of the merle allele leads to the observable color pattern, but few negative effects. Two copies, however, cause a variety of health problems, including vision and hearing problems, because these sensory systems do not develop properly. This situation creates a dilemma for breeders. If two merle dogs (genotype Mm) are bred, approximately 25% of the offspring will have two versions of the merle allele (MM) and will have hearing or eye defects. For this reason, many breeders insist on breeding a dog with a Merle coat (Mm) only to dogs with solid coats (mm). In this case, only half of the offspring will have the desirable merle markings—but all of the puppies will be healthy.

The final example involves the popular Dalmatian. Because of inbreeding over many generations to develop a uniform set of physical characteristics—a disease trait also was incorporated into 100% of the bloodlines. All Dalmatians are homozygous for a disease mutation that predisposes dogs to develop painful stones in their bladders or kidneys (similar to human diseases). The disease, which is related to uric acid metabolism, can be managed through diet or medications, but sometimes surgery is necessary to remove the stones. In other words, all Dalmatians have two copies of the kidney stone (hyperuricemia) allele, which is recessive and involves a single nucleotide substitution. A breeding program was created to introduce the normal allele back into the breed. However, this action has generated considerable controversy among breeders, owners and Kennel Clubs, which register purebred dogs, and many organizations do not recognize the disease-free line of dogs as “pure” Dalmatians.

There are many perspectives on how genetic information should be used to manage disease risk, breed “better” dogs for competition or as companions, or even to generate a profit. This activity enables students to explore these questions as they place themselves in different roles related to dog health, breeding and care.