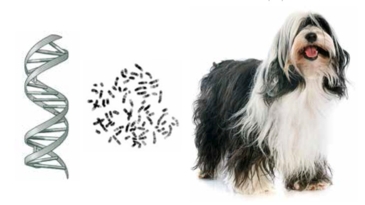 Traditionally, biology books have begun the section on genetics with a discussion of the experimental findings of Gregor Mendel (1822-1884). Mendel was an Austrian friar, who studied variation in plants to answer questions about heredity. He created lines of pea plants that were pure-breeding for specific traits, such as flower color (purple or white) and seed surface texture (smooth or wrinkled). He tracked the inheritance of these traits through multiple generations of pea plants, and conducted many crosses of plants with different characteristics. Mendel concluded that hereditary information is transmitted from parents to offspring in the form of discreet “particles,” which we now refer to as genes and alleles.

Beginning with the discovery of DNA, biologists are learning that genetics is much more complex that the particulate model of inheritance proposed by Mendel. In fact, most characteristics (phenotypes) are shaped by the actions of multiple genes, rather than the “one gene—one trait” model that so often is taught to biology students. Traits that are influenced by more than one gene, and often also by behavioral and environmental factors, are referred to as complex traits. Many common human illnesses and conditions, such as cardiovascular disease, diabetes or asthma, are the result of many genes acting in concert with environmental conditions.

To identify genetic changes associated with a particular characteristic or disease, biologists survey large sections of DNA from many different individuals to find areas where changes sequence of bases occurs consistently in affected individuals. Because new technologies make it possible to determine the exact order of the nucleotide bases—adenine (A), thymine (T), guanine (G), and cytosine (C)—in a segment or multiple segments of DNA, sections of the genomes of many different individuals can be compared to find changes in the DNA sequence that might be related to particular traits. These traits may include genetic changes that promote or prevent diseases. This type of survey approach was used to find the mutation responsible for long hair in dogs that students explored in the previous activity.

DNA sequence changes can be simple substitutions at a single location. Other kinds of changes include the insertion of extra bases, the deletion of sections of DNA, and the repetition of one or more sequences. Changes in the sequence of bases are called mutations, and they occur as mistakes when DNA is copied. However, mutations are not always detrimental. In fact, many mutations have no apparent effect on the organism, and in some cases, are beneficial.

As shown in the previous activity, changes in the DNA sequence can (but do not always) affect the proteins that are produced. Overall, the effects of these changes might be neutral, detrimental (leading to death, disease or reduced ability to survive and reproduce) or advantageous (such as conferring disease resistance or a competitive advantage over other individuals).