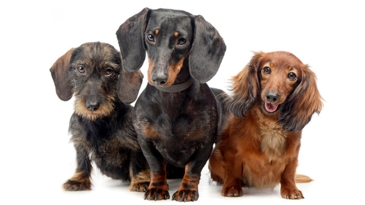 Students learn about the genetic code, and how small substitutions within the code can lead to physical changes in individuals. Students use authentic data to uncover the single nucleotide polymorphism (SNP) responsible for long hair in dogs.

In the previous activity, students were introduced to the wide variety of characteristics found across breeds of dogs. They used information produced by modern genetics research to learn which breeds of dogs were most related and how genetics information is used commercially to help people figure the history and possible parentage of mixed breed dogs. These examples represent applications of genomics—a field that offers a new way of thinking about genes and heredity.

Traditionally, genetics researchers have focused on identifying single genes, their variant forms (alleles) and their functions. Genes are hereditary units that occupy a fixed location on a chromosome or DNA molecule. Each gene has a specific influence on the characteristics of an individual (phenotype) and provides the instructions for creating proteins (technically, certain sections of genes code for strings of amino acids or polypeptides). Usually a single gene has various forms, known as alleles. Since every individual has two sets of chromosome, each individual also has two versions or alleles for each gene. The interaction between the two alleles, and of a particular gene with other genes and the environment, determines the phenotype of the individual.

Genes are encoded along a pair of twisted DNA (deoxyribonucleic acid) strands, known as a double helix. Each strand is made of a sequence of four much smaller molecules, adenine (A), guanine (G), cytosine (C) and thymine (T). The strands are complementary, so that an A on one strand is matched by a T on the other strand, and a C is matched by a G. The human genome consists of more than 3 billion of these pairs, called base pairs, packaged into 23 pairs of chromosomes. A small amount of DNA also is found in the mitochondria (where energy is processed inside cells).

The “central dogma” of genetics explains that DNA codes for RNA (ribonucleic acids, another class of long chain molecules), which in turn, encodes and manufactures all of the proteins needed by an organism. The process of creating RNA from DNA is called transcription. Even though DNA has two strands, only one strand is read during transcription of a given sequence (genes can be located on either strand). The other strand serves as a template to produce a molecule of RNA with the same sequence as the “coding” or “non-template” strand. We now know that 80% of human DNA does not code for proteins. These noncoding regions have other functions, including preserving important gene sequences and regulation of gene functions.

The relatively new field of genomics looks at an organism’s entire complement of DNA, including all of its genes. The nucleus of every cell (except for red blood cells) contains a copy of the entire genome of the organism. The human genome was sequenced for the first time in 2003. In 2005, a complete dog genome was sequenced using DNA from a female boxer named Tasha.

Mutations provide the raw material for genetic variation, and come about through mistakes when DNA is copied or environmental factors, such as ultraviolet radiation from the sun. A mutation is a permanent change in the sequence of DNA. Mutations range in size from a change in a single DNA base (point mutation) to a change in a large segment of a chromosome. When a single nucleotide at the same location differs between individuals, the variation is called a “snip” (short for single nucleotide polymorphism or SNP).

In this activity, students are introduced to genetic variation by looking at recent research results on hair length in dogs. Short hair is the ancestral (original) condition in dogs. Long-haired dog breeds were found to have a mutation in the gene that signals for the termination of hair growth. The mutation causes a loss of function in hair growth regulation, presumably leading to longer hair.

The researchers began by studying a gene that was known to contribute to hair growth in other species (called FGF5, named for the “fibroblast growth factor 5” protein). By comparing sequence data from different dog breeds, they found that a single mutation (from G to T) at one location consistently correlated with the presence of long hair. The mutation causes an amino acid change (cystein to phenylalanine). Only dogs that are homozygous (have two copies) for the mutation have long hair. Students will use some of the original published data to find the location and nature of the mutation.