It Begins with the Heart 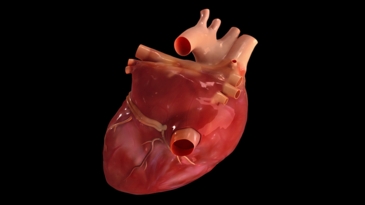 The circulatory system consists of the heart, blood, and blood vessels. The heart, which is slightly larger than the fist, provides the initial force for blood flow. In this lesson, students learn basic information about the heart, its role in circulation, and its external appearance.

The heart is a relatively small organ—only slightly larger than a person’s fist. Yet it initiates all movement of blood around the body. Why is the movement of blood important? Because blood picks up and carries oxygen and nutrients to all parts of the body. Blood also carries wastes to appropriate places in the body for disposal. This activity, and the two that follow it, will focus on the structure of the heart, its function as a pump, and the circulatory system’s critical role in distributing oxygen and removing carbon dioxide.

The circulatory system consists of the heart, blood and blood vessels. All vertebrates (animals with backbones) have closed circulatory systems, meaning their blood is contained within vessels, separate from the fluid surrounding cells in the body.

At first glance, the heart’s outer surface seems to offer few clues about its important function. However, careful external examination reveals many key structures. For instance, one will notice that the human heart consists of four chambers. Two chambers receive blood from outside the heart, and the other two pump it out of the heart. The receiving chambers are known as atria (the singular form is atrium). The right atrium receives oxygen-depleted blood from the body’s major veins (vessels that bring blood to the heart), and the left atrium receives oxygen-rich blood from the lungs. The two pumping chambers (the ventricles) receive blood from the atria and pump it away from the heart. The right ventricle pumps oxygen-depleted blood via a short loop of blood vessels through the lungs, where it is replenished with oxygen, while the ventricle pumps the oxygenated blood back out into the body through large arteries (vessels that carry blood away from the heart). In short, the left side of the heart works with oxygen-rich blood, and the right side of the heart works with oxygen-depleted blood.