The Heart is a Pump 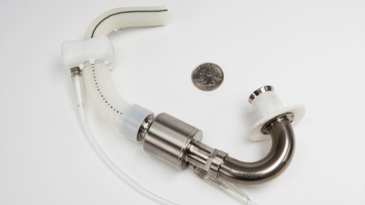 Students learn about the internal structures of the heart, and the roles these structures play in circulating blood to the lungs and the rest of the body.

The heart is a sophisticated mechanical pump made of strong muscle. Thus, to understand how the heart works, it is helpful to know a little about pumps.

A pump is a mechanical device that moves fluid or gas by pressure or suction. Consider, for example, a simple bicycle pump. When you pull the handle up, you create a vacuum inside the metal tube, which fills with air through a hole in the side. When you push the handle down, a one-way valve in the hole closes and air moves through the rubber tube, into the bike tire. What keeps the air from coming out of the tire and back into the pump? Another one-way valve at the end of the rubber tube prevents the air from moving backward.

Note that both a pumping mechanism and a one-way valve are required to make a pump work. The lotion bottle has two chambers (in the tube below the pump and in the dispenser above the pump). The lower chamber of the dispenser holds a portion of lotion, ready to move up into the pump.

Like the lotion pump, some animals, such as fish, have a two-chambered heart. The first chamber (atrium) fills with blood returning from the body and then passes it to the second, more muscular chamber (ventricle). The ventricle contracts, pushing the blood out into the vessels that carry it through the gills for oxygenation and on to the body. A one-way valve prevents the blood from flowing backward into the atrium. Other animals, such as reptiles and amphibians, have three-chambered hearts.

Birds and mammals, including humans, have four-chambered hearts. Two chambers receive blood and the other two pump it out. The receiving chambers are known as atria (the singular form is atrium). The right atrium receives oxygen-depleted blood from the body’s major veins (vessels that bring blood to the heart), and the left atrium receives oxygen-rich blood from the lungs. The atria transfer their blood, through one-way valves, into the two different pumping chambers, called ventricles. The right ventricle pumps oxygen-depleted blood via smaller blood vessels through the lungs, where it is replenished with oxygen, and cleansed of carbon dioxide. The left ventricle squeezes (contracts) to pump oxygenated blood out into the rest of the body through large arteries (vessels that carry blood away from the heart).

So ultimately, animals with four- chambered hearts have two circulation loops. The first loop travels to and from the lungs (pulmonary circulation). Blood filled with carbon dioxide enters the lungs, where carbon dioxide is replaced with oxygen, and then carried from the lungs back to the heart for pumping to the rest of the body. The second loop carries blood to all parts of the body, delivering oxygen and nutrients and gathering wastes for proper disposal (systemic circulation). This very efficient system keeps blood moving in the right direction, and to the right parts of the body, 24 hours a day.

Why doesn’t the blood get pushed back into the atria when the ventricles contract? Valves! Remember the one-way valves in the mechanical pumps? Similar one-way valves between each chamber in our hearts ensure that blood moves in only one direction. The heart also has valves at the exits to the ventricles, so blood can’t get sucked back in. Thanks to valves, the blood in our bodies always moves forward, never backward.