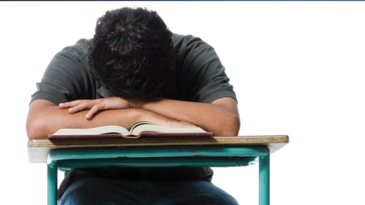 Changes in daily routines and schedules sometimes conflict with our internal clocks. In this lesson, students investigate how changes in their bedtime impact their own sleep patterns.

As students learned earlier, most people go to sleep and wake up at about the same times each day. This sleep/wake cycle is regulated by a group of nerve cells inside the brain, called the suprachiasmatic nuclei, which act as a timer, or “biological clock.” These cells receive time cues from the outside environment. For example, special cells in the retina (the part of the eye that has receptors for light) detect sunlight and send messages to the brain in humans and other mammals, saying, “Wake up. It’s daytime.” In fact, daily exposure to sunlight is an important cue to synchronize the body’s sleep cycle.

Abrupt changes in one’s sleep cycle, such those caused by a new work schedule or travel across time zones, can make it difficult to fall asleep or stay awake, because external cues conflict with messages being sent by the body’s internal clock. The brain says, “Sleep,” but outside conditions signal, “Be active, it’s morning!” Other factors that can affect, or interfere with, the sleep cycle include physical exercise, medicines, meal times and stimulants (such as caffeine in coffee, tea and soft drinks).

This activity allows students to investigate their own internal clocks. For one night, students will go to bed one hour earlier than usual. They will observe and record any impacts that this change has on their abilities to fall asleep, and on their usual wake times the next morning.