Reason for the Seasons 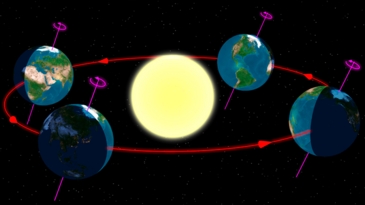 Earth's seasonal rotation around the sun, as seen from the north.
© Tau’olonga, Wikimedia Commons, used with permission.

Students plot the path of the sun’s apparent movement across the sky on two days and learn why Earth experiences different seasons.

Many students (and adults) mistakenly believe the seasons are due to the changing distance between Earth and the sun as our planet progresses in its orbit. According to this (incorrect) scenario, Earth experiences summer when it is closer to the sun and winter when it is farther away. Earth’s distance from the sun does vary over the course of a year. At its near point (perihelion), Earth is 147.9 million kilometers from the sun; at its far point (aphelion), it is 152.09 million kilometers away. However, the difference between the perihelion and aphelion is small—less than 3%.

The hours of nighttime also affect the seasons. In winter, days are shorter than nights, so there is more time for Earth’s surface to radiate heat back into space. This causes a net decrease in heat in locations experiencing winter. But in summer, days are longer than nights, so there is a net increase in heat in Earth’s surface.

In the northern hemisphere, the longest day of summer, known as the summer solstice, occurs around June 21; the shortest day, or winter solstice,
occurs on or around December 21. Between summer and winter, during the seasons of spring and fall, neither of Earth’s poles leans toward the sun. Days and nights are exactly 12 hours long on both the first day of spring (spring equinox) and the first day of fall (autumn equinox).

Materials per Student or Group of Students

Part 3a: Build a Sun Tracking Board

Part 3b: Tracking the Sun

Time: Two days scheduled two to three months apart. For each day, four or more 10-minute sessions will be conducted at 15-minute intervals.

Challenge students to provide possible reasons why portions of the Arctic are known as the “Land of the Midnight Sun.” Help them understand that, during summer in the northern hemisphere, the North Pole and Arctic regions face the sun. At this time of year, areas above the Arctic Circle experience continuous light throughout the day and night (including midnight). Have students hypothesize what happens when the South Pole and Antarctic regions are tilted toward the sun, and what happens in these regions during winter months. Ask students what it would be like to live in continuous light or dark for several months.