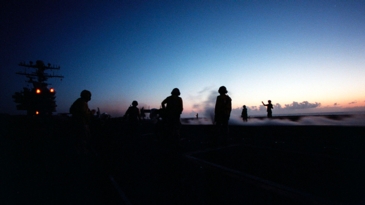 All mammals, including humans and many other kinds of animals, need sleep. Most people have regular patterns of sleeping and waking times. In this lesson, students collect information about their own sleep cycles and use a fraction wheel to examine their data.

All mammals—including humans and most vertebrates—sleep. In fact, we spend about one-third of our lives sleeping, but many aspects of sleep still are not understood. Once viewed as a passive shutting-down of most body systems, sleep now is believed to have important functions related to the processing of information by the brain, and the repair and maintenance of body systems. In humans, sleep is known to consist of several stages, each characterized by different levels of brain and muscle activity.

Many people vary their sleep patterns using external alarm clocks to meet school or work schedules. Without an alarm, most individuals sleep about the same number of hours and wake at about the same time each day. This occurs because humans’ natural daily wake-up times are governed by an internal “clock,” consisting of about 10,000 nerve cells deep inside the brain.

Even without any light or sound cues, most people sleep and wake in roughly 24-hour cycles. And while sleep patterns are stable (they change little, or very slowly), scientists have found that the amount of sleep required to be alert differs considerably from one individual to another. These differences are believed to be inherited as genetic traits.

Sleep patterns also vary by age. For instance, newborns sleep 16–18 hours each day, including several naps. At age one, children average 12–14 hours of sleep daily, including two naps. Twelve-year-olds generally sleep nine or ten hours each day, without naps. Adults sleep six to eight hours per day. The urge to nap in the afternoon is normal for all teenagers and adults, but most people override this urge by remaining active.

Sleep deprived individuals perform less effectively, remember less information, and think less clearly than those who are well rested. In some professions (truck driver, police officer, etc.), sleep deprivation can contribute to accidents. Regardless of the job, a good night’s sleep is key to performing at one’s best.