Mapping the Spread of HIV/AIDS 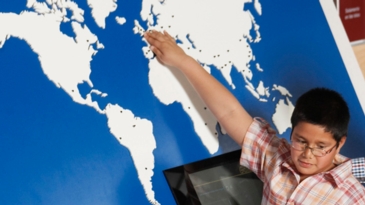 Students read an essay about how scientists first tracked HIV/AIDS, then play the role of epidemiologist as they use actual data to map the spread of the disease worldwide.

Diseases have haunted the human race throughout history. With the continued expansion of the world’s population, international travel and global trade, diseases are able to spread more rapidly now than ever before. Since its origination in the 1930s, HIV has reached every country in the world and killed 30 million people. It is estimated that another 34 million people currently are living and struggling with HIV/AIDS.

This certainly is not the first disease calamity to strike humans. The Spanish Flu pandemic of 1918–19 resulted in the death of an estimated 50 million people, either directly from the disease or from its complications. Before that, yellow fever, small pox and the black plague ravaged populations around the world. Another old killer, malaria, still plays a deadly role in many nations.

Disease detectives, called epidemiologists, help us to understand and defeat these awful illnesses. Epidemiologists study factors that affect the health of populations. Their work is a colossal investigation being conducted in remote natural settings and high-tech laboratories around the world. Epidemiologists collect data to identify outbreaks of old and new diseases, analyze samples, make computer projections, and evaluate possible cures and strategies. Their goal is to identify the cause of disease and determine what to do about it.

The following classroom activity places students in the role of disease detectives, as they investigate trends in HIV infection worldwide. Students will discover that many countries with high HIV infection rates have low levels of per capita income and education, two characteristics often linked with disease. For example, malnutrition and insufficient protection against parasites, often found in economically deprived nations and communities, can limit the immune system’s ability to fight off infections. Under these circumstances, individuals are more susceptible to infection by HIV and other pathogens (disease causing organisms). HIV/AIDS treatments are expensive, and are less available in economically disadvantaged countries. Poor children have an increased likelihood of contracting HIV/AIDS from an infected mother during pregnancy or while nursing, because HIV treatments to reduce the chances of HIV transmission are expensive and may not be an option, or even available.

HIV/AIDS also depletes household resources and income. Medical care is expensive and family members who care for the sick may not be able to work. Children may be left to fend for themselves or even become orphaned. And poverty sometimes leads people to participate in risky activities that increase their chances of being exposed to disease. Sustainable economic development, improved standards of living, and better education are essential to combating the global HIV/AIDS pandemic.

Have each student "adopt" one country from his/er table and research that country's resources, people, politics, and other conditions that may contribute to the spread of HIV/AIDS and/or other health problems.