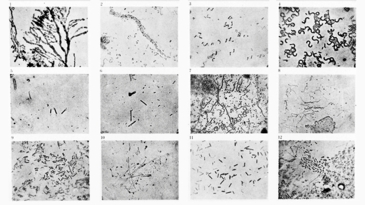 Students read about six milestones in the history of microbiology, create a timeline of events, and learn that many scientific advances become possible only after appropriate tools and techniques are  developed.

This activity is from The Science of Microbes Teacher's Guide and is most appropriate for use with students in grades 6–8. Lessons from the guide may be used with other grade levels as deemed appropriate.

Very little attention was paid to the world of microbes until the 1600s, when Robert Hooke developed a primitive compound microscope (one that uses two lenses in sequence) and described tiny organisms that he observed with it. Even more detailed observations of microscopic organisms were made by Anton van Leeuwenhoek, who developed precise techniques for grinding magnifying lenses. Van Leeuwenhoek observed numerous small, swimming organisms in pond water and named them “animalcules.”

It was not until the mid-1800s that scientists had enough tools to begin serious studies of microbes. In the 1850s, Louis Pasteur studied the fermentation of wine, which he found to be caused by yeast cells. He proposed that microorganisms also could cause disease, and he later developed the process of pasteurization to remove harmful bacteria from food.

Pasteur’s work stimulated that of Robert Koch, a physician who studied anthrax (a disease of cattle and sheep). Koch is credited with developing many culture techniques, including the use of nutrient agar for growing bacteria. He also established a set of rules to guide decisions about whether a given microbe actually caused a disease. These rules are known as “Koch’s Postulates.”

Much later, in the 1930s, Walter Fleming accidentally discovered that substances produced by a common fungus, Penicillium, could kill Staphylococcus bacteria in cultures. His work led to the development of penicillin, the first antibiotic. Since viruses are so much smaller than bacteria, most research on viruses and viral diseases began later than work on other microbes. In the 1890s, two investigators working separately, Martinus Beijerinck and Dmitrii Ivanowski, studied juices extracted from the leaves of plants infected with what is now known to be tobacco mosaic virus. They filtered the juices to remove bacteria and found that even when highly diluted, the liquid could still cause infection in plants. Ivanowski concluded that an infectious agent other than a bacterium—a filterable “virus”—led to the disease. Beijerinck called the substance “contagious living fluid.”

Neither investigator was able to observe or grow the hypothesized disease-causing agents. Later, in the 1930s, Wendell Stanley isolated crystals of tobacco mosaic virus. The invention of the transmission electron microscope by Ernst Ruska in 1933 made it possible to observe viruses for the first time at magnifications of 10,000 times or more. For this, Ruska received the Nobel prize in physics.

The process by which microbiology knowledge has accumulated is typical of how science proceeds. Often a critical tool, such as the microscope, is needed before questions can even be asked. Progress occurs unevenly, with one critical discovery suddenly opening entire new areas of investigation.

Time: 45 minutes for one or two class periods