How Does Light Affect Root Growth? 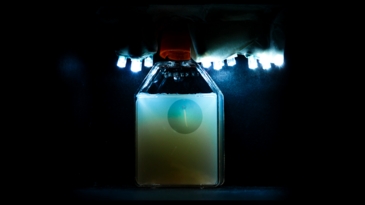 In a controlled environment, effects of phototropism can be measured.
© Baylor College of Medicine\Travis Kelleher

Students build an experiment chamber to test the effects of light on Brassica rapa roots, and compare their results with outcomes from plant experiments conducted aboard the International Space Station as part of Mission STS-134.

This activity is from the Plants in Space Teacher's Guide, and is appropriate for all grade levels.

Developed and conducted in collaboration with BioServe Space Technologies of the University of Colorado, and the United States National Aeronautics and Space Administration.

Generally, leaves and stems grow upward, toward light sources, while roots grow downward. But plants do not have nervous systems or sensory organs—no eyes, ears, or vestibular system like animals have. So, how do plants “know” which way is up?

Plants sense and respond to their environments in a number of ways. Receptor molecules within plant cells perceive changes in external conditions, such as light, and initiate internal signaling pathways that enable the plant to react. Communication inside plants occurs hrough hormones, chemical substances produced in one part of the plant that have a developmental or physiological effect elsewhere in the plant. There are seven major kinds of plant hormones, and one, auxin, is primarily responsible for directional growth responses.

Light is important for plant development, including flowering and seed germination. It also is essential for photosynthesis, and can stimulate plant growth in a particular direction (toward or away from a certain wavelength of light). A plant’s growth response to light is called phototropism, from the Greek words trope (for “turn”) and photo (for “light”). A phototropic response involves the detection of a light wavelength by receptor molecules in plant cells, and transduction (i.e., conversion) of that signal into biochemical responses that lead to altered growth patterns.

Charles Darwin, the great evolutionary biologist, investigated grass seedlings’ growth responses to blue light (about 460 nanometers in wavelength) as early as 1881. He already knew that growing plants would bend toward light coming from a single direction. However, he found that when he covered the tips of grass seedlings with a foil cap, the seedlings no longer tilted toward the light source. Normal bending occurred when he covered the seedling tips with a glass tube and when he covered the stem below the tip with an opaque collar. Darwin and his coinvestigator son, Francis, proposed that the seedlings were bending toward light in response to an “influence” that was transported down the stem from the growing tip.

In 1926, Fritz Went, a Dutch scientist, identified the chemical messenger that causes cells on the shaded side of a shoot to elongate and grow faster than cells on the lighted side, thereby bending the stem toward the light source. He called this messenger hormone auxin. Today, synthetic auxins play important roles in agriculture as weed killers, and in preventing fruit from dropping off trees and bushes before it can be harvested.

Note: For in-depth information regarding the role auxins play in plant growth and development, and about Brassica rapa, please download the Plants in Space Teacher's Guide.

Gravity is the force that keeps planets in orbit around the sun and governs motion in the solar system. Gravity alone holds us to Earth’s surface and explains the phenomenon of the tides.

Materials per Student Group or Student

Download color images from the Plants in Space Teacher's Guide.

Foundations for the Future: Capitalizing on Technology to Promote Equity, Access and Quality in Elementary Science Education; Opening Pathways for Teacher Instructional Opportunities in Natural Sciences