There is no evidence that properly cooked poultry or eggs serve as a source of infection.
Stephen Ausmus, Courtesy of USDA

Bird flu once again is in the news. The most recent outbreak involves an H7N9 strain of flu, which infects poultry and other birds.[1] According to Nature News, mutations of the H7N9 virus may allow it to jump from birds to humans more easily than H5N1 did. As yet, there is no evidence of sustained human-to-human transmission, but the World Health Organization has confirmed 104 cases, including 21 deaths from H7N9. [2]

When we consider some of the most dangerous things in the world, we probably think of wars, natural disasters, or other large events. However, microscopic viruses have killed as many, if not more, people than any other cause in history. For example, viruses were responsible for the three largest global outbreaks of disease in the 20th Century. All of these incidents involved variations of the influenza virus, or "flu." The Spanish flu of 1918 was by far the most deadly, killing between 20 and 40 million people. The Asian flu killed 100,000 people in 1957; 700,000 people died in the 1969 Hong Kong flu pandemic.[3][4]

Serious flu outbreaks in human populations have involved only Type A influenza, the most common of the three forms of influenza virus (A, B and C). Type A influenza can infect people, birds, pigs, horses, and other animals. Migratory waterfowl, most notably ducks, are the primary natural reservoirs for all variations of influenza A viruses.[5] Type B flu viruses normally infect only humans, but have not caused pandemics (global outbreaks of disease). Type C influenza viruses cause only mild illness in humans.

Influenza A viruses are divided into subtypes, based on two proteins, hemagglutinin (H) and neuraminidase (N), located on the surface of the virus. Hemagglutinin helps the virus attach to cells in the respiratory system, while neuraminidase is involved in the release of new virus particles from host cells. To date, 15 subtypes of H (H1 through H15) influenza A viruses, along with nine subtypes of N (N1 through N9) influenza A viruses, have been identified. Most have been detected only in birds and produce few, if any, symptoms. However, several strains of influenza with the H5 and H7 proteins have been shown to cause widespread disease and death in birds, especially domesticated birds.[6] Furthermore, each subtype, H1 through H15, could theoretically combine with any of the nine “N” surface proteins to create, for example H5N1, H5N2, or H5N3.[5] To date, widespread disease in humans has been caused by three influenza A virus subtypes: H1N1, H2N2 and H3N2.

Viruses are incapable of reproducing on their own. Therefore, they must invade and take over the machinery of a living cell to produce more virus particles. Some viruses, such as influenza A, are unable to “proofread” and correct errors that occur while their genetic information is being copied. These pinpoint changes (mutations) contribute to gradual alterations in genetic makeup and may lead to new variants, or strains, of the virus that interact with the immune system differently than have previous strains. This process is referred to as antigenic drift.[7]

One way that this can occur is if a common human strain of influenza A virus and an avian influenza virus both infect the same animal. Viruses generally swap genetic material easily. In the case of flu, such a “re-assortment” could result in a new strain, different from both original strains. Pigs are susceptible to both bird and mammalian viruses, and thus serve as excellent “mixing vessels” for recombining genetic material from related viruses.[8] Humans living near poultry and pigs have long been thought to be at risk for exposure to such new strains. Antigenic shift was responsible for the emergence of the Hong Kong flu in 1969. This flu was caused by H3N2, which arose when the human H2N2 subtype re-assorted with genes from bird viruses containing the H3 subtype.[9]

Most avian influenza A viruses do not infect humans. However, since 1997, more than 100 people have been infected with H5N1, a virus subtype usually found only in birds. More recently, H7N9 infections are appearing in persons living in China.[10] Since the influenza virus is shed through feces, nasal secretions, and the saliva of birds, direct contact with infected or uncooked poultry, or contaminated surfaces appears to be the primary means of transmission from birds to humans. There is no evidence that properly cooked poultry or eggs serve as a source of infection.[11] To date, neither the H5N1 or H7N9 virus has evolved an efficient mechanism for human-to-human transmission.[12] It is not difficult to imagine a scenario, however, in which a virus could undergo an antigenic shift that makes it transmissible from one human to another. The most likely mechanism for this shift would be the simultaneous infection of a single individual (human, bird, pig, etc.) with H5N1 or H7N9 (bird flu) and H1N1, H2N2 or H3N2 (known human subtypes of flu). This situation might allow the swapping of genetic material by the two strains that results in a novel, highly contagious variant of influenza to which very few humans would have immunity.

Urbanization, overcrowded conditions, and global travel and trade provide ideal conditions for viruses and other infectious diseases to spread. Pandemics occur when simultaneous, widespread outbreaks occur worldwide, regardless of sanitation, hygiene, or standards of health.[11] According to the World Health Organization, pandemics erupt when three criteria are met: (1) a highly infectious, disease-causing agent, such as a virus or bacteria, emerges; (2) the agent (also called a pathogen) infects the human population; and (3) the agent, or pathogen, is easily transmitted from one human to another over a sustained period of time.[11] 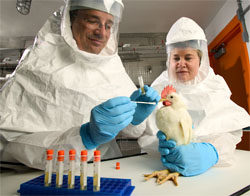 Two of these criteria were met in the case of bird flu. A strain of highly contagious avian influenza virus (H5N1) emerged in 2003 among bird populations and “jumped” species (from birds) to infect humans (killing more than half of those infected).[11] In addition, mass destruction of infected bird flocks failed to eliminate the virus. Evidence shows that in some parts of Asia, H5N1 now exists within the native population of poultry, as well as in some wild birds, thus increasing the risk of further transmission to humans. Domesticated ducks have been found to harbor and shed large amounts of H5N1 from the intestines without signs of illness, further facilitating potential spread of the virus.[13]

H5N1 vaccines have been developed for use in humans and in poultry. Four antiviral drugs, oseltamiivir and zanamivir (neuraminidase inhibitors, which work by blocking the transmission of the disease from cell to cell within the body), and amantadine and rimantadine (M2 inhibitors, which inhibit replication of the virus inside cells), may be effective in cases of human infection with flu virus. Health officials continue to monitor closely all outbreaks of flu within bird and human populations, document new human cases of avian flu, promote the development of safe and effective vaccines, stockpile antiviral drugs, and study signs of antiviral drug resistance by reported strains of influenza A viruses.[3][13][14]  In addition to information available from the Centers for Disease Control and Prevention and the World Health Organization websites, the U.S. Department of Health and Human Services has a national site, Flu.gov, to establish a portal for communication with the public.14 All three resources provide background information, recent developments, and advisories concerning the avian influenza A.

[12] Centers for Disease Control and Prevention. 2013. Background on Human Infections with other Avian Influenza Viruses. Retrieved 4-29-2013 from http://www.cdc.gov/flu/avianflu/h5n1-human-infections.htm.