The severe cold snap of January 2014 was caused by a polar vortex—an ominous-sounding weather phenomenon that actually is part of the normal accumulation of cold air over the poles. A polar vortex is a spinning, large area of low pressure, found over both the North and South poles. The elliptical mass of frigid air is locked in by strong, upper-level winds or the jet stream.

In the Northern Hemisphere, the winds circulate in a counter-clockwise direction (west to east). The polar vortex becomes stronger in winter, when the region receives less direct sunlight and air in the troposphere, and the stratosphere becomes cooler. The shape and location of the polar vortex varies from day to day, depending on interactions with other weather systems and atmospheric movements related to the oceans, landmasses and mountains. Occasionally, the Arctic polar vortex pushes southward, bringing with it extreme cold temperatures.

As a polar vortex moves across the US Midwest and Plains, temperature drops can be extreme and rapid because there are no geographic barriers to slow the movement of frigid Arctic air. The 2014 Arctic vortex event led to temperatures in the minus 20-30° (F) degree range for parts of Montana, North Dakota, Minnesota and northern Iowa. On January 7, the National Weather Service issued wind chill advisories and warnings for much of the eastern two-thirds of the United States, with wind chill values as low as minus 20-50° (F).

Wind chill is the perceived decrease in air temperature on exposed skin due to the flow of air. Windy conditions increase the chilling effect. Extreme cold temperatures and wind chill can cause frostbite, damage to body parts such as the nose, ears, fingers and toes caused by freezing. Another effect of prolonged extreme chilling is hypothermia, a drop in body temperature.

Paradoxically, climate experts believe that global warming is behind the current and similar stretches of cold weather. The circular winds in the Arctic vortex are driven by cold sinking air over the poles and rising warm air in lower latitudes. If the sinking polar air warms too rapidly over the Arctic, it can disrupt the pattern of the vortex. The Arctic currently is warming at twice the global average rate.

The image below was captured by the National Oceanic and Atmospheric Administration’s GoES-East satellite on January 6, 2014, at 11:01 a.m. EST (1601 UTC). A frontal system is draped from north to south along the US East Coast. Behind the front lie the clearer skies and bitter cold air associated with the polar vortex (http://www.nasa.gov/content/goddard/polar-vortex-enters-northern-us/#.UswdTRmnyr8). 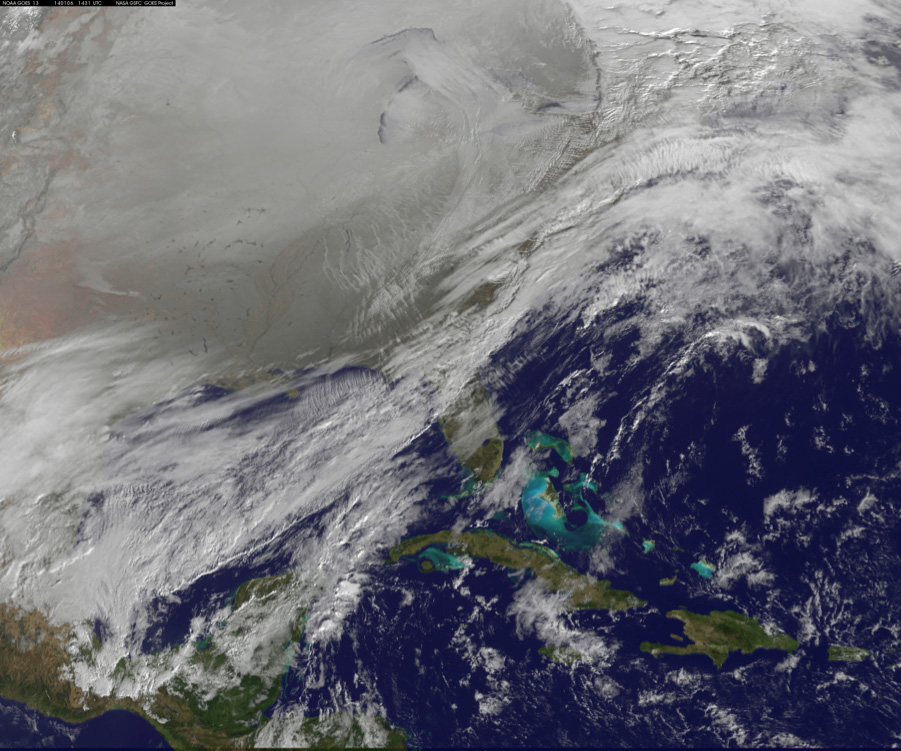 What is the Polar Vortex, National Aeronautics and Space Administration
http://ozonewatch.gsfc.nasa.gov/facts/vortex_NH.html

Frostbite, Medline Plus, US National Library of Medicine
http://www.nlm.nih.gov/medlineplus/frostbite.html

Hypothermia, Medline Plus, US National Library of Medicine
http://www.nlm.nih.gov/medlineplus/hypothermia.html