One hundred years after Albert Einstein predicted the existence of gravitational waves, scientists have finally spotted these elusive ripples in space-time.

In a highly anticipated announcement, physicists with the Advanced Laser Interferometer Gravitational-Wave Observatory (LIGO) revealed on 11 February that their twin detectors have heard the gravitational 'ringing' produced by the collision of two black holes about 400 megaparsecs (1.3 billion light-years) from Earth.

“Ladies and gentlemen, we have detected gravitational waves,” David Reitze, the executive director of the LIGO Laboratory, said at a Washington DC press conference. “We did it!”

One black hole was about 36 times the mass of the Sun, and the other was about 29 solar masses. As they spiralled inexorably into one another, they merged into a single, more-massive gravitational sink in space-time that weighed 62 solar masses, the LIGO team estimates.

“These amazing observations are the confirmation of a lot of theoretical work, including Einstein's general theory of relativity, which predicts gravitational waves,” says physicist Stephen Hawking of the University of Cambridge, UK. Hawking noted that Einstein himself never believed in black holes.

This is the first black-hole merger that scientists have observed. The violent event temporarily radiated more energy — in the form of gravitational waves — than all the stars in the observable Universe emitted as light in the same amount of time.

When played as an audible sound, the waves make an unmistakeable ‘chirp’ — a rapidly rising tone — followed by a ‘ringdown’, the radiation pattern from the merged black hole. The 'loudness' of the recorded signal also provides a rough measure of when the merger occurred: between 600 million and 1.8 billion years ago.

The work will be published in a series of papers in Physical Review Letters and the Astrophysical Journal.

The historic discovery — which physicists say will probably lead shortly to a Nobel prize — opens up the new field of gravitational-wave astronomy, in which scientists will listen to the waves to learn more about the objects that can produce them, including black holes, neutron stars and supernovae.

“This is just the first step in a much larger and more exciting development,” says Ilya Mandel, a theoretical physicist at the University of Birmingham, UK. Gravitational waves will join γ-rays, X-rays and radio waves as "part of the toolkit that we have for understanding the universe", he says.

It is also a long-sought victory for the LIGO experiment, which had spent a decade searching for the signal in the 2000s before a US$200-million upgrade improved the sensitivity of its twin detectors, one in Livingston, Louisiana, and the other in Hanford, Washington.

The discovery itself was made before the upgraded version, Advanced LIGO, had officially begun to take scientific data. At 10:50 a.m. Central European Time on 14 September, during the experiment's first observing run, LIGO physicist Marco Drago at the Max Planck Institute for Gravitational Physics in Hannover, Germany, saw a strange signal on his computer.

Software that analyses data in real time was indcating that both interferometers had seen a wave resembling the chirp of a bird with a rapidly increasing pitch. Within an hour, the news had reached Drago's boss, physicist Bruce Allen. The recording looked too good to be true. “When I first saw it I said, 'Oh, it's an injection, obviously,'” Allen says.

It was an oscillation that began at 35 cycles per second (hertz) and rapidly increased to 250 hertz. It then became chaotic and rapidly died down; the whole thing was over within one-fourth of a second. Crucially, both detectors saw it at roughly the same time — Livingston first and Hanford 7 milliseconds later. That delay is an indication of how the waves swept through the Earth. 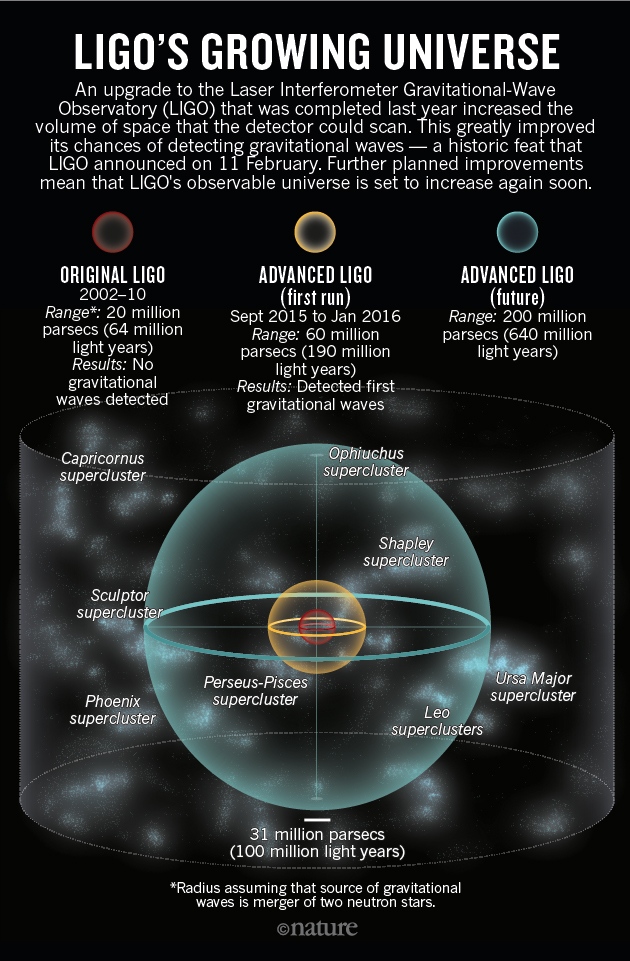 Other gravitational-wave detectors — the Virgo interferometer near Pisa, Italy, and the GEO600 interferometer near Hannover — were not operating at the time and so could not confirm the signal. Had Advanced Virgo been on, it would have probably detected the event as well, says its spokesperson, Fulvio Ricci, a physicist at the University of Rome La Sapienza. LIGO scientists have run a series of careful checks to ensure that the signal is real and means what they think it does.

In the past, a few senior members of the LIGO team have tested the group's ability to validate a potential discovery by secretly inserting ‘blind injections’ of fake gravitational waves into the data stream to test whether the research team can differentiate between real and fake signals. But the September detection happened before blind injections were being made, so it is thought to be a signal from a real astrophysical phenomenon in the Universe.

To pinpoint the source of gravitational waves, researchers have to triangulate a signal spotted by different machines spread around Earth. When both LIGO detectors are operating along with Virgo or GEO600, scientists expect to be better able to locate future gravitational-wave sources. Another interferometer in Japan is under development, and a third LIGO site in India has been proposed. A greater geographic spread of detectors would strengthen confidence in any signals.

Einstein’s general theory of relativity predicts that any cosmic event that disturbs the fabric of space-time with sufficient force should produce gravitational ripples that propagate through the Universe. Earth should be awash with such waves — but by the time they reach us, the disturbances that they produce are minute.

In 1974, physicists Joseph Taylor and Russell Hulse at the University of Massachusetts Amherst indirectly confirmed the existence of gravitational waves by watching radio flashes emitted by a pair of neutron stars whirling around one another; the shifts in the flashes’ timing matched Einstein’s predictions of how gravitational waves would carry energy away from the event. That discovery won them the 1993 Nobel Prize in Physics (see: ‘The hundred-year quest for gravitational waves — in pictures’).

But direct detection of the waves had to await the sensitivity achieved by Advanced LIGO, which can detect stretches and compressions of space-time that are as small as one part in 1022 — comparable to a hair’s-width change in the distance from the Sun to Alpha Centauri, the nearest star to the Solar System.

LIGO’s twin interferometers bounce laser beams between mirrors at the opposite ends of 4-kilometre-long vacuum pipes that are set perpendicularly to each other. A gravitational wave passing through will alter the length of one of the arms, causing the laser beams to shift slightly out of sync.

More than 1,000 scientists now belong to the LIGO collaboration. By studying gravitational waves, this next generation of researchers expects to probe entirely new realms of physics, including strong-field gravity, the very early Universe and how matter behaves at extremely high densities.

Hawking says that he would like to use gravitational waves to his area theorem: that “the area of the final black hole is greater than the sum of the areas of the internal black holes.” He adds: “This is satisfied by the observations.”

“It’s the very real dawn of a new era,” says Mansi Kasliwal, an astronomer at the Carnegie Observatories in Pasadena.